It’s an overcast February morning, but Dr. Robert Thoburn’s energy defies the dreariness of the day. His daily hourlong gym workout already behind him, the 79-year-old rheumatologist is attending a lecture on climate change at the Harn Museum of Art, and from here, he’s going trap shooting.

“It’s climbing another hill,” he says of learning to trap shoot. “These tiny little targets travel 70 miles an hour, and you have to perfect the technique.”

Thoburn, an adjunct associate professor in the UF College of Medicine, is intentional about keeping his mind sharp and remaining younger than his years. Undoubtedly, he is the very picture of what many would consider to be aging successfully.

At UF Health, teams of researchers are striving to find techniques to help multitudes of seniors to live as Thoburn does — to remain independent and active and enjoy life.

One of the keys to that success is to delay what is known as the cognitive aging process, or the decline in cognition that occurs in almost everyone. In parallel with UF experts who are studying disorders of memory — that is, pathological variants such as Alzheimer’s disease and other types of dementia — researchers who specialize in age-related memory loss and the study of other kinds of thinking, problem-solving and brain changes with aging are focused on the normal cognitive aging process that affects 97 percent of people. With studies spanning from rodent models to human clinical trials, these investigators are working to change the future for those 65 and older, whose population is projected to double by 2050.

“Age-related memory loss or decline in thinking and memory skills is normal — it’s what we expect, in fact,” says Adam Woods, PhD, an assistant professor of clinical and health psychology and assistant director of the Center for Cognitive Aging and Memory at the Evelyn F. and William L. McKnight Brain Institute of UF.

“But that doesn’t mean we can’t do something about it. Our research attempts to find ways to postpone or compensate for the cognitive aging process.”

To that end, Woods is leading a team now embarking on the largest Phase III clinical trial to date designed to test a technique called transcranial direct current stimulation, or tDCS, under a $5.7 million grant from the National Institute on Aging. This noninvasive therapy involves passing a weak and safe electrical current through electrodes affixed to a person’s scalp for no more than 20 minutes at a time. Trial participants simultaneously will undergo “cognitive training,” engaging in specially designed computer tasks that get harder as you get better.

The study seeks to determine whether tDCS can amplify benefits of cognitive training, and whether these combined techniques might be able to actually slow certain aspects of the normal cognitive aging process or even delay the onset of impairment for people whose trajectories have fallen out of the range of normal. A top predictor of developing a memory disorder is if a senior’s cognition is declining faster than that of the average normal older adult; slowing that transition by even six months could translate into billions of dollars saved in the U.S. health care system, Woods says.

His new study is not about memory, as people tend to think of memory. Rather, the study targets other kinds of thinking and problem-solving needed for complex tasks of daily living, such as food preparation, medication use, financial management and driving.

As the American population ages, researchers across the country are seeking methods to preserve cognition. Studies evaluating whether low-impact physical activity can positively affect cognition have not shown great results, Woods says, but moderate to strenuous exercise indeed has shown noteworthy benefit.

Likewise, cognitive training has shown potential for slowing certain aspects of cognitive aging. In fact, the new study by Woods and co-principal investigators Michael Marsiske, PhD, an associate professor of clinical and health psychology at UF’s College of Public Health and Health Professions, and Ronald Cohen, PhD, Evelyn F. McKnight chair for clinical translational research in cognitive aging, seeks to build upon Marsiske’s and others’ previous research showing that for older adults, certain cognitive training regimens can have a lasting benefit on cognitive ability and the ability to maintain better driving performance. 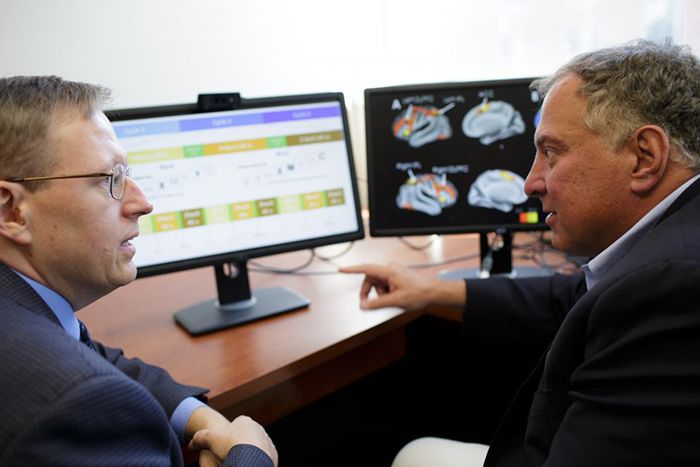 The ACT research team will use state-of-the-art neuroimaging to measure changes in the brain in response to cognitive training by itself and in conjunction with transcranial direct current stimulation, or tDCS. "The goal is to find out whether learning capacity can be increased in older adults by coupling cognitive training with electrical stimulation of the brain," says Ronald Cohen, PhD, right, with Michael Marsiske. Photo by Mindy C. Miller

“What we found in that study after following 3,000 people for a decade was training was generally effective and durable,” Marsiske says. “We still detected benefits of training up to 10 years after training, which was kind of surprising. The analogy we keep using is that you would go to the gym for five weeks and never again and still see the benefits a decade later — small but clearly discernible differences.”

One area of focus was particularly effective: what is called “useful field-of-view,” or how much information a person can take in at a glance, which is critical for driving and tends to restrict with aging.

“People who receive this useful field-of-view training showed, according to archival state records, about a 50 percent reduction in motor vehicle crash rates because they were taking in information differently,” Marsiske says.

Now comes the new study, Augmenting Clinical Training in Older Adults: The ACT Study, which will combine tDCS with training for processing speed and working memory. Working memory is the amount of information you can hold in your head and process without losing it: for example, holding a phone number in your head for 30 seconds. With a large sample of 65- to 89-year-old adults — 360 participants across UF and two other McKnight Brain Institute sites, at the University of Miami and University of Arizona — the investigators will examine whether tDCS can strengthen those training effects.

“By strengthen, we mean strengthen the size of the training-related gain, strengthen the appearance of that training in brain images and strengthen in terms of improving its generalizability to everyday function,” Marsiske says. 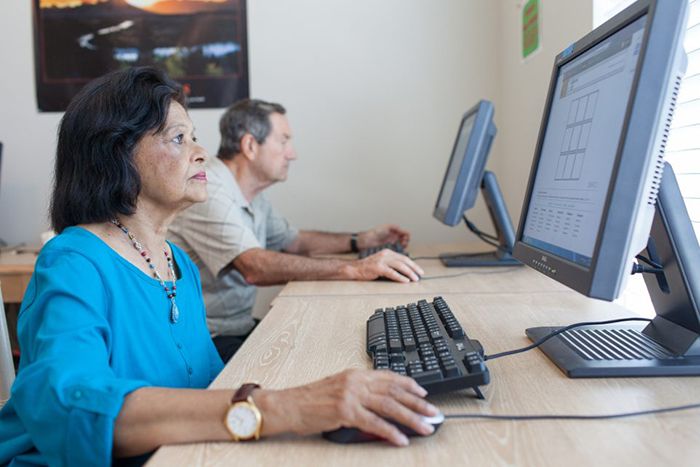 Similar to the ACTIVE clinical trial, which involved 2,802 seniors ages 65 to 96, the newly developed ACT study, or Augmenting Clinical Training in Older Adults, will use BrainHQ, a computer program aimed at training attention, brain speed, memory and other skills.

The hope is to maintain the ability to carry out regular yet complex tasks of daily living as long as possible, such as filling a weekly pill reminder box using prescription bottles with varying directions — from “one twice a day” to “every other day” to “take with a meal.” An oversight could result in an inconvenience or a devastating consequence.

TDCS is believed to work by affecting the neuroplastic response of brain tissue. This stimulation is showing promise for other conditions as well, such as treatment of depression or pain. It is non-invasive, and to the participant, it feels like tickling or prickling on the scalp.

As the ACT study gets underway in humans following encouraging pilot research funded by the McKnight Brain Research Foundation, basic-science investigators at UF’s McKnight Brain Institute are studying cognitive aging in animal models. Across the spectrum from rodents to humans, these neuroscientists are testing parallel tasks; for example, the ability to discriminate between similar stimuli or the ability to walk and carry out a cognitive task simultaneously.

“That gives us a bridge to translation, and at the same time, we can test very mechanistic questions in our animal models that are directly related to what humans are doing,” says Sara Burke, PhD, an assistant professor of neuroscience in the UF College of Medicine.

Her team is also studying whether lifestyle interventions such as diet changes could help improve functioning of brain networks. Given that glucose dysfunction is common in seniors, Burke is testing a ketogenic diet that is low in carbohydrates and high in fat in a rat model.

“When you look at aging, you’re talking two things: genes and environment,” says Tom Foster, PhD, a professor of neuroscience and the Evelyn F. McKnight chair for research on cognitive aging and memory. “Exposure to toxins, your diet, the amount of exercise you get, your social interactions — these are all environmental factors which will then influence the brain.”

And while study of the aging brain has been undertaken in various forms for decades — researchers have been testing cognitive training in older adults since the 1970s — they now have unprecedented tools at their disposal: highly advanced neuroimaging scanners that for the first time can show second-to-second changes in brain activation patterns. With a new   state-of-the-art Siemens 3T MRI/S scanner installed at the McKnight Brain Institute in December, participants in the ACT trial will undergo scans to reflect evidence of neural plasticity, or changes to the brain.

“The ability to combine modern neuroimaging with a cognitive training study so that we can understand at a brain level what’s going on — that’s a huge advance,” says Marsiske, and one that could potentially affect untold numbers of seniors.

Woods envisions a day when, with clinician oversight, seniors might be able to use a tDCS-cognitive training program in the comfort of their own homes. There, they could strengthen their brains for a safer and more satisfying present.

Understanding the Aging Brain was originally published on the University of Florida website.