The President presented the administration’s proposed budget for FY20 on March 11, 2019. Entitled “A Budget for A Better America,” the document and other budget materials including budget amendments are available on the Office of Management and Budget website. The overview below and the accompanying summaries and analyses for individual agencies are based on the administration’s budget documents. All figures denote budget authority unless otherwise noted.

The administration’s FY20 proposed budget sets overall spending at $4.7 trillion, including $1.317 trillion in total discretionary funding, which is a 1.8 percent cut below FY19.

For defense discretionary spending the budget includes $750 billion, including $576 billion in line with the BCA for FY20, plus $174 billion for overseas contingency operations (OCO) spending. OCO spending does not count against the BCA spending caps. Within the OCO spending is $8.6 billion for border security. 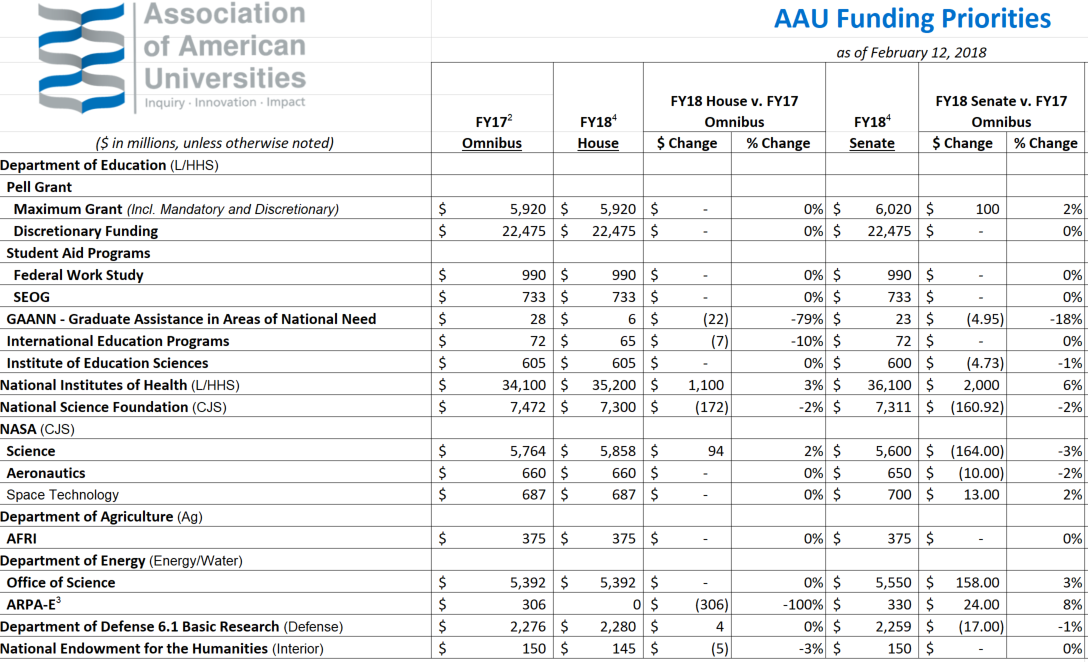 This table represents the current status of FY20 appropriations for AAU’s funding priorities at the Departments of Education, Energy, and Defense as well as the National Institutes of Health (NIH), National Science Foundation (NSF), NASA, AFRI, and the National Endowment for the Humanities (NEH).
Body

The budget provides $500 million for AFRI, an $85 million increase, or 20.5 percent, from FY19. The budget prioritizes competitive research through USDA’s flagship grant program.

The budget provides $5.546 billion for the DOE Office of Science, a decrease of $1.039 million, or 16 percent, from FY19. The budget proposes elimination for the Advanced Research Projects Agency – Energy (ARPA-E).

National Endowment for the Humanities (NEH)

The budget provides $38 million for NEH, a $117 million, or 75 percent, decrease from FY19. The budget proposes to begin shutting down the NEH in 2020 because the administration does not consider the activities within the agency to be “within its core Federal responsibilities.” Grants that extend beyond FY20 will continue to receive funding and matching offers made before the beginning of FY20 will be honored.

The budget provides funding for NIH at $34.4 billion,* a decrease of $4.7 billion, or 12.1 percent, from the FY19 level. The budget includes $492 million in resources available through the 21st Century Cures Act funding as well as $256 million for AHRQ which would be moved under the NIH umbrella.

The budget provides $22.5 billion in discretionary funding for the Pell Grant program in 2020, which, combined with mandatory funding, would support a maximum award of $6,195. This maximum award does not account for an inflation adjustment. The budget proposes expanding the Pell Grant program to cover short-term programs that provide students with a “credential, certification, or license in an in-demand field.” The May 13 budget amendments also propose a cancellation of $3.9 billion unobligated carryover funds in the Pell program to be used for deficit reduction.

It also includes a risk-sharing proposal to hold institutions of higher education accountable for results by requiring colleges and universities to share a portion of the financial responsibility associated with Federal student loans to encourage them to improve performance.

The Administration also proposes to consolidate the various income-based repayment programs into a single plan to prioritize repayment for undergraduate borrowers. This single income-based repayment plan would cap a borrower’s monthly payment at 12.5 percent of discretionary income. For undergraduate borrowers, any remaining balance after a 15-year repayment period would be forgiven. For borrowers with graduate debt, any balance remaining after a 30-year repayment period would be forgiven. In addition, the budget proposes ending Public Service Loan Forgiveness (PSLF), a debt forgiveness program for public servants, and proposes to eliminate subsidized student loans. These policies together would provide an estimated savings of $207 billion over the next decade.

The budget also requests $1.8 billion for student loan servicing, a $133 million increase from the current year. The funding would support the Trump administration's "NextGen" plan to overhaul how the federal government collects federal student loans.