It seems fitting that Henry Towery ’17 — who grew up in Corning, New York, and was raised by a father who worked with fiber optics — would opt to specialize in the medical imaging portion of biomedical engineering.

“Stony Brook had a well-established biomedical engineering program that surpassed all of the other programs,” said Henry. “It also features a hospital, which I viewed as a great resource for research facilities.”

And make use of that resource he did, in every way he could.

For example, Henry assisted with Harvard’s ICON Reload study in its Stony Brook Hospital location. The study sought to develop a medical device that could better detect brain natriuretic peptide (BNP) in the blood of emergency room patients. BNP is an indicator for heart failure. Once the blood was drawn, Henry would collect and freeze the sample to be used for further testing.

“I learned about the steps that are needed in clinical research to develop medical devices and through my interaction with those patients, I improved my ability to convey complicated medical information to individuals who have never studied medicine,” Henry said.

He also participated in studies that will aid burn victims and patients with chronic wounds. “Chronic wounds and ulcers are a major healthcare problem affecting six- to eight-million in the United States alone and cost 10 to 20 billion dollars annually,” said Henry.

For his biomedical engineering senior design project Henry built a device that can be used to read a baby’s heart rate right after delivery. “The baby heart rate monitor device is needed,” he said, “because a stethoscope and EKG are unable to perform this task and it is critical for how the doctor is able to monitor and treat the baby by accurately measuring and displaying the heart rate. Henry said that more time and resources would be needed to make it a plausible tool to market for use in the delivery room.

One of the highlights of Henry’s academic career was working on a project with the Emergency Research Department at the Stony Brook Medical Center — an abstract that involved the association between triage acuity scores, resource utilization and mortality. When patients are brought into the emergency room they receive an acuity score based on their conditions and this score is supposed to be an indicator of the amount of resources the patient will need during their stay in the emergency room. This project looked at how acuity scores are measured and if they accurately measure the resources the patients use in the ER. The project found that triage scores still could accurately measure the amount of resources needed, patient length of stay in the ER, and mortality rates in the ER.

As a student, Henry was called upon to speak at the American College of Emergency Physicians this past October in Las Vegas. In front of doctors, medical students, residents. “I was the most inexperienced presenter but when I got up to speak my nerves calmed down, my speech went smoothly and I confidently fielded complex questions from the crowd,” he said. “It was an experience I will never forget.”

Henry’s community service, required for all University Scholars, involved working as an EMT with the Stony Brook Volunteer Ambulance Corps and led to New York State certification. He responded to calls on campus as part of a four-person shift. “This assured me that I had chosen the correct career path by serving within the medical field and I gained a newfound appreciation for emergency medicine and its associated technology,” he said.

When it comes to the world of medicine, Henry Towery is in it for the long run.

Marathon Man Henry Towery ’17 is Motivated to Make a Difference was originally published on the Stony Brook Universiy website. 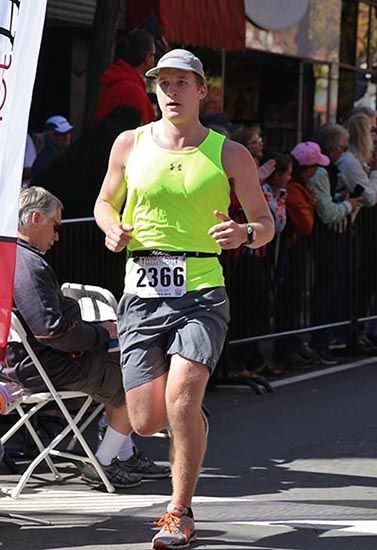