Gordon Ash was expecting to have his first major surgery this summer: a carotid endarterectomy to treat his narrowed carotid artery.

But when a CT scan showed the blockage in his artery was higher up in his neck than many other patients with carotid disease, Ash became the first person at Michigan Medicine to undergo a new procedure.

TCAR, which stands for transcarotid artery revascularization, uses a device from Silk Road Medical to briefly reverse the direction of blood flow. With blood (and any clots) flowing away from the brain while the physician operates, the patient’s risk of stroke during the procedure is lower.

It’s a technique developed by Enrique Criado, M.D., a former Michigan Medicine faculty member, and tested at Michigan Medicine during clinical trials. TCAR was recently approved by the Food and Drug Administration.

“This is a promising treatment and the stroke rates have been reported as low as 1.4 percent in trials,” says Nicholas Osborne, M.D., Ash’s surgeon and an assistant professor of surgery at U-M. “It’s a safer carotid stent procedure than anything previously offered.”

Osborne describes TCAR as a hybrid of what’s already available to treat a narrowed carotid artery, but with a twist.

First, the surgeon makes a small carotid exposure in the low neck. After reversing the blood flow away from the brain, the surgeon will directly stent from that position, avoiding the risks that come from traveling up from the femoral artery, the aorta and up to the carotid artery.

When the stent is placed via TCAR, allowing the carotid artery to function normally, the blood flow reverses back to its regular direction toward the brain. 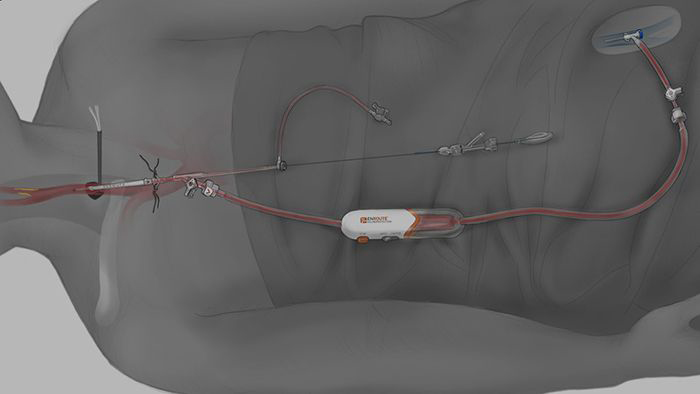 With TCAR, a patient's blood flow is briefly reversed to reduce the risk of stroke during carotid surgery.

The first report of the procedure was around 14 years ago, and the unique nature of the approach appealed to vascular surgeons. The general idea, though, is familiar.

“In open vascular surgery, it’s not uncommon for us to let arteries back bleed to wash them out,” Osborne says. “This was actively applying that open surgery technique to an endovascular procedure.”

For Ash, the notion of receiving a new surgery was surprising at first.

“Initially, I had expected and wanted the standard endarterectomy procedure,” the 62-year-old says. “But Dr. Osborne thought the TCAR was a better option for me, so I said, ‘Well, that’s what we’re going to do.’”

Surgeons typically have recommended stenting or an endarterectomy to repair the carotid artery. Carotid stenting from the femoral artery comes with a higher risk of stroke, Osborne says, making it less commonly used. The wire and distal protection device can knock plaque off into the bloodstream during the procedure, causing a stroke as it ascends toward the brain.

In an endarterectomy, an open surgery with more recovery time, nerve injury risk is a greater concern. This was the case for Ash, as the higher location of blockage in his artery meant his sensory nerves, swallowing mechanism and nerves that control his tongue could have been damaged.

For this reason, Osborne and Ash decided to change their plans from an endarterectomy to the TCAR.

Matthew Corriere, M.D., also a vascular surgeon at the Frankel Cardiovascular Center, teamed up with Osborne during Ash’s TCAR procedure. Corriere says he’s excited about adding a third option for patients with carotid stenosis to lower their stroke risk.

“Being able to offer carotid endarterectomy, stenting or TCAR allows us to individualize the procedure choice based on the patient and their anatomy,” says Corriere, also an associate professor of surgery.

Roughly one day after his June procedure, Ash was already heading home.

Later that week, the Novi, Michigan, grandfather was back on baby-sitting duty with his three young grandchildren for a few days. And he returned to his job as a data center telecommunications designer the following week.

Ash says the recovery was manageable and notes that he only needed an over-the-counter pain medication for some discomfort right afterward.

The less invasive option of TCAR, coupled with its lower stroke rate, may be a better option for elderly or higher-risk patients, or for those who simply don’t want to undergo an open surgery like a carotid endarterectomy, Osborne says.

“This will replace some transfemoral stents, but it’ll also replace some carotid endarterectomies,” Osborne notes. “Anyone with symptomatic carotid disease, or asymptomatic with more than 70 percent stenosis would qualify. This procedure is quickly being adopted nationally.”