Every day, it becomes a little harder to find a corner of healthcare not being touched in some fundamental way by data analytics. That Fitbit on your wrist may soon send your resting heart rate to Google, where it would join the electronic health records of millions of others, and where algorithms could yield comprehensive patient profiles that will be available to healthcare providers anytime, anywhere. Those providers, incidentally, will very likely deliver that care more efficiently after their workflows have been reconfigured by algorithms. Just about everything, from our heartbeats to our blood cell counts to our waiting time at the doctor’s office, may soon be tracked, analyzed, compared, and ideally, improved by the mathematical insights of data science. Artificial Intelligence, or AI, is coming to healthcare, and it’s coming fast, even as the risks of all that data in the hands of healthcare providers are still being uncovered and explored.

Researchers the world over see big data as a way to help huge communities of people—and individuals. At Boston University, on the macro side, algorithms analyzing millions of geotagged tweets are being used to identify physical characteristics of neighborhoods that contribute to healthier lifestyles. And on the micro side? Algorithms are searching scans of human brains for proteins that may be indicators of Alzheimer’s disease.

Let’s take a look at a few of the many BU projects that use big data to tackle medical problems by utilizing the multidisciplinary expertise of the University—matching public health experts with computer science people, or electrical engineers with medical doctors.

Answers from the Other Side of the Planet

Gerald Denis, a BU School of Medicine associate professor of pharmacology and medicine, believes an important key to understanding health problems in Boston can be found on the other side of the planet. Denis is building a secure, privacy-preserving database of clinical, molecular, and cellular information from cohorts of cancer and diabetes patients at the School of Medicine and from hospitals in Mumbai and Bangalore.

“This project is meeting a need to compare data across institutions,” says Denis, who is working with Anand Devaiah, a MED associate professor of otolaryngology, neurological surgery, and ophthalmology and director of the Biomedical and Health Technology Development & Transfer Domain for BU’s Institute for Health System Innovation & Policy. “Here in Boston, for example, we treat a lot of breast cancer patients who are obese and have metabolic complications such as diabetes and inflammation that may exacerbate their risk for cancer metastasis. In India, clinicians also treat patients with breast cancer who are diabetic and inflamed, but who are lean rather than obese. Normally these two populations would never be compared, so we will use new computational tools to pool these two populations to reveal what is shared and what’s different.”

To preserve the privacy of patients’ medical records, Denis turned to Mayank Varia, codirector of the Center for Reliable Information Systems & Cyber Security, who used a cryptography technology called secure multiparty computation, which allows collaborative data analysis without revealing private data. Software for the research was developed by the Software & Application Innovation Lab (SAIL), directed by Andrei Lapets at BU’s Rafik B. Hariri Institute for Computing and Computational Science & Engineering. The project, in its pilot phase, was funded by the Dahod Breast Cancer Research Program and the Boston University Digital Health Initiative, a collaborative effort between the Institute for Health System Innovation & Policy and the Hariri Institute for Computing and Computational Science & Engineering.

“Working with the first pieces of data, we’ve been successful,” says Denis. “Next we need to test it with data from Boston and from India. After that, we’ll seek funding to build it out.” 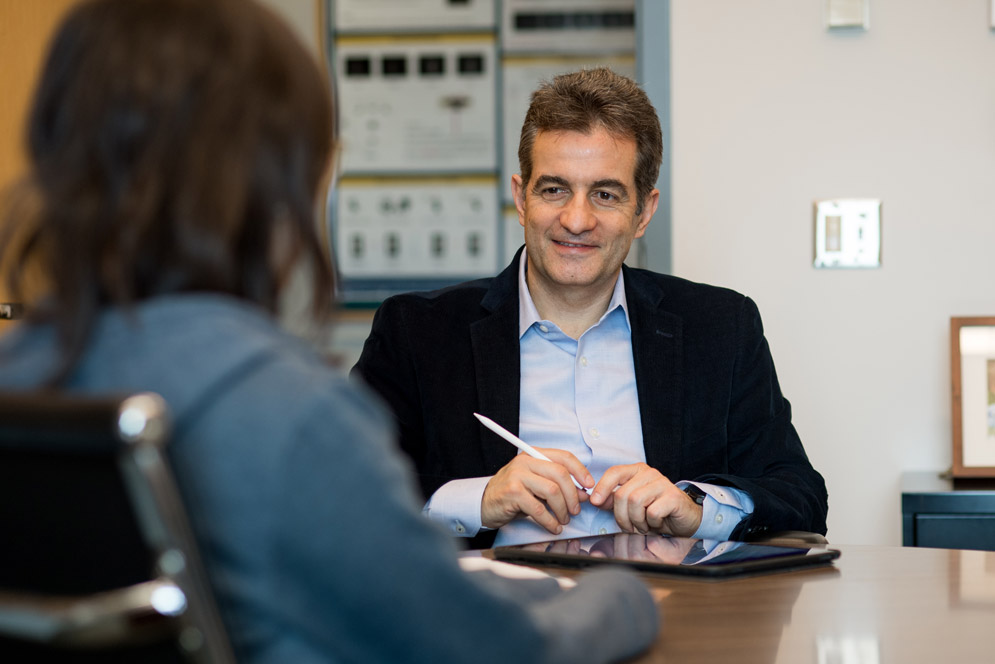 At the School of Medicine, senior data scientist Jerry Sobieraj is helping Boston Medical Center (BMC) bring down the number of patients who return to the hospital within 30 days of treatment, an event that can incur a penalty from Medicaid payers if the return rate exceeds area norms.

Working with algorithms developed by his team of analysts and with data from BMC’s electronic medical records, Sobieraj’s group categorized patients into three groups: those with a high risk, moderate risk, and low risk of reappearing at the hospital in 30 days. And because BMC has a fair share of patients who are homeless and otherwise hard to keep track of, Sobieraj has further identified a subgroup of high-risk patients who appeared to be “amenable to intervention.” Defining that cohort, whose follow-up care can be carefully monitored, may sound uncomplicated, but doing it effectively required the consideration of nearly 200 variables, including diagnoses, medications, clinical observations, fall risk, and red and white blood cell counts.

Sobieraj’s group has also built a “low acuity care” model, one that identifies patients who are likely to show up at an emergency room with a medical problem that doesn’t need the expensive care provided by emergency departments. That cohort, he says, is responsible for 30 to 35 percent of BMC’s 10,000 emergency department visits per month, each of which costs about $300.

Next steps, says Sobieraj, will involve devising an effective means of contacting that group of patients and educating them about the costs and inconvenience of emergency care overuse.

Like unnecessary emergency room visits, hospitalizations that could be avoided have been the elephant in the hospital room for decades. The latter is the target of research conducted by data scientist Yannis Paschalidis, a College of Engineering professor of electrical and computer engineering, and research partner William G. Adams, a BMC physician and a MED professor of pediatrics. Paschalidis was spurred to action several years ago, when he learned that in 2006, the United States spent about $30.8 billion on hospitalizations that could have been prevented through better patient care, healthier patient behavior, or improved ambulatory services. Now, with help from a team of graduate students and nearly $2 million from the National Science Foundation, he and Adams have built an algorithmic model whose analysis of medical records can flag patients at increased risk for medical emergencies with greater than 80 percent accuracy. The two researchers have so far focused on chronic heart disease and diabetes, and they aimed at patients who would require hospitalization within a year. “In terms of cost,” says Paschalidis, “care for these patients is a large percent of preventable hospital care.”

The researchers are also at work on a similar project, aimed at reducing the number of readmission penalties, using algorithmic analysis of electronic health records from general surgery patients, to predict which patients are likely to reappear at BMC within 30 days of their procedure.

Yet another BU project has teamed up Paschalidis with systems engineering division head Christos Cassandras, an ENG professor of electrical and computer engineering and of systems engineering, and Rebecca Mishuris (MED’08), a MED assistant professor of medicine. Fueled by a three-year, $900,000 grant from the National Science Foundation, the researchers are developing a pilot health informatics system to identify patients who are at risk of heart disease or diabetes, which alone costs the United States about $5.8 billion for hospitalizations that could be prevented.

Spotting those patients sooner would enable early intervention, and ideally, says Paschalidis, personalized treatment of those patients, based in part on outcomes of treatments with different drugs.

Like the Google Fitbit plan, the project will use algorithms that incorporate data from electronic health records and from real-time sources, including wearable, implantable, and home-based networked diagnostic devices.

“Eventually, we hope to move from predictions to prescriptions,” says Paschalidis. “We have some initial results for diabetes and hypertension. The goal is to make recommendations available in electronic health records as guidance for the care provider.”

Elsewhere on the Medical Campus, Vijaya Kolachalama, a MED assistant professor of medicine, has written algorithms that may spot evidence of Alzheimer’s disease in scans of an entire brain, a big step forward from the single brain section scans of earlier quests for Alzheimer’s. The more comprehensive image not only offers researchers vastly more information, it gives it to them much faster. “Before this,” says Kolachalama, “one might have been able to analyze 10 scans a day. Now a computer can do a million scans in a week, and if that computer is learning from those million scans, then it is doing something very interesting.”

Kolachalama’s lab is also using imaging data and machine learning to explore the progression of kidney disease and osteoarthritis. His kidney disease research, which uses digitized renal biopsy data obtained from BMC, is conducted with a team of nephrologists that includes Vipul Chitalia, a MED associate professor of medicine. Algorithms for that project will predict the amount of life left within a kidney after the patient comes to the hospital and undergoes a biopsy.

Kolachalama also collaborates with Rhoda Au, a MED professor of anatomy and neurobiology and neurology and the head of neuropsychology at the Framingham Heart Study, a seven-decade-long collection of data run by Boston University and the National Heart, Lung, and Blood Institute (NHLBI). Au, whose work was recently lauded in Bill Gates’ blog gatesnotes, is looking for biometric clues to Alzheimer’s disease onset in several human behaviors. She is combing through thousands of audio files of patients recorded during health assessments, using advanced machine learning to analyze changes in linguistic and acoustic features, such as pauses, hesitation, word frequency, and pitch, which may be early indicators of disease. And in a broader effort, she has created a digital brain health–monitoring platform that via wearable devices tracks such things as sleep, walking gait, and balance.

“We are capturing a range of behaviors associated with the risk of disease,” says Au. “We are monitoring them so we can detect it much earlier than we can do right now.” 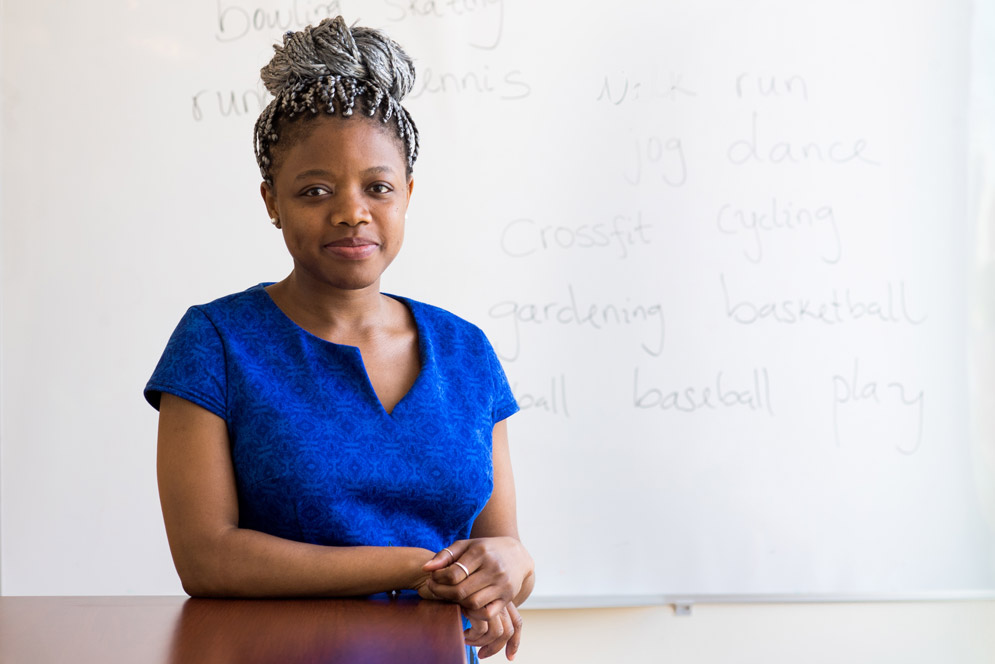 While Kolachalama goes small, Elaine Nsoesie is thinking big. The School of Public Health assistant professor of global health is using geotagged tweets to study various aspects of health in different neighborhoods. Nsoesie, a Data Science Faculty Fellow in the Data Science Initiative at the Hariri Institute for Computing and Computational Science & Engineering, was part of a team that mapped 80 million geotagged tweets from more than 600,000 Twitter users to census tracts and zip codes across the United States to develop indicators of happiness, food, and physical activity. She and SPH postdoctoral associate Nina Cesare hope to better understand how discussions of health behaviors on social media differ across demographic groups. They believe that their social media data can lead to new and better ways to assess health indicators in communities across the United States. After all, she says, that information is timely, and collecting it is much less costly than using surveys.

Nsoesie is also working with Margrit Betke, a College of Arts & Sciences professor of computer science, on a project aimed at understanding Kenyan dietary preferences. She and Betke are analyzing four million Instagram images posted by people in the East African country, and hoping to learn if, and in what parts of the country, Kenyans prefer discussing western foods to their native diets. One challenge, says Betke, has been teaching computers to recognize African foods. When they can do that, she says, they can begin to learn how “green” or how “greasy” the Kenyan diet is, and if it varies in urban and rural areas.

Like Nsoesie, Betke works simultaneously on several health-related research projects. One of her most promising, conducted with Terry Ellis (MED’05), a Sargent College of Health & Rehabilitation Sciences assistant professor of physical therapy and director of the Center for Neurorehabilitation, provides home-based physical therapy support to people with Parkinson’s disease. A camera-based AI system in the patient’s home tracks the reach and speed of the patient’s movements and compares them to ideal parameters. Software then sends an assessment to a healthcare provider, who can advise the patient to move faster or slower or further extend their movements.

All because the data told them to.