Consumers want strawberries to be red, sweet, ripe and juicy, like those fresh picked from a garden. Suppliers want them to be easy to handle and ship, without getting squished. Commercial strawberry growers need their crops to be high-yielding and disease-resistant.

An international team of scientists led by the University of California, Davis, and Michigan State University has taken a step that might allow breeders to grow a strawberry to satisfy all those needs. They’ve sequenced and analyzed the genome of the cultivated strawberry, which will provide a genetic roadmap to help more precisely select desired traits. The study was published today (Feb. 25) in the journal Nature Genetics.

“Without the genome we were flying blind,” said Steven Knapp, professor of plant sciences and director of the UC Davis Strawberry Breeding Program. “It was like having a library of books, but all the books’ pages were blank.”

The U.S. is the world’s largest producer of strawberries, and almost 90 percent of them are grown in the cool, coastal climates of California. Growers are constantly struggling to fight off diseases like Fusarium wilt, Verticillium wilt and Macrophomina without having to use fumigants. The assembled genome will allow scientists to pinpoint specific genes that can protect the plant against diseases. Strawberries can also have diseases that may involve several different genes, similar to complex diseases in humans. Sequencing the genome will help unravel that complexity.

“The genome sequence is powerful because it provides scientists with barcodes for nearly all the genes in strawberry. We can use that information to identify genes that play an important role in traits of agricultural importance,” said Knapp. 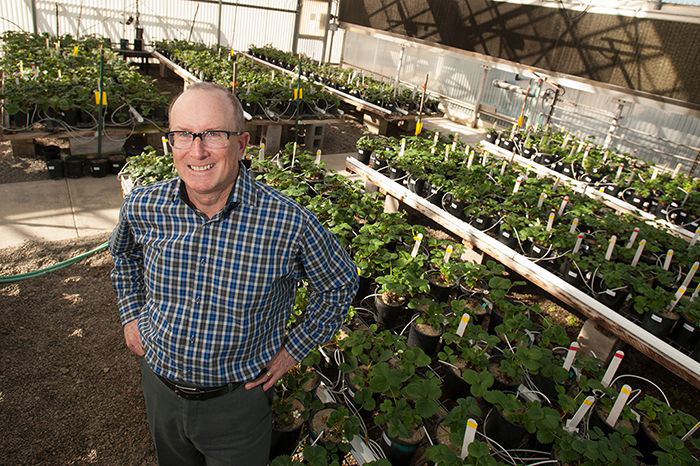 Similarly, scientists may also be able to find genes in the strawberry that lead to increased flavor or aroma for the consumer, while maintaining the firmness and shelf life for producers.

Origins of the strawberry

Patrick Edger, co-corresponding author with Michigan State University, and his team also deciphered the complex evolutionary history of the cultivated strawberry. While humans are diploid species, meaning each cell contains two complete sets of chromosomes, one from each parent, the cultivated strawberry is an octoploid. Each cell in a strawberry plant contains eight complete sets of chromosomes, so untangling its evolution is a feat.

“Strawberry has a rich history that spans the globe, ultimately culminating in the fruit we enjoy today,” said Edger.

Other UC Davis authors in the study include postdoctoral scholars Thomas Poorten and Michael Hardigan. The study was funded by the USDA National Institute of Food and Agriculture, the National Science Foundation, and the California Strawberry Commission.

Breeding a Better Strawberry was originally published on the University of California, Davis website.