President Biden’s recent decision to forgive up to $20,000 in debt for lower- and middle-income student borrowers has sparked significant amounts of praise and criticism in the public sphere. Unfortunately, much of the debate has demonstrated a serious misunderstanding of the facts around college costs and student debt in the United States – and it’s time to set the record straight.

To hear many commentators opine, one would think that millions of Americans were burdened with massive amounts of student debt because our top institutions have let the costs of an undergraduate education spiral wildly out of control while simply sitting on piles of endowment cash. The reality is that most graduates of America’s leading research universities never go into debt to earn their degrees, that university endowments and the scholarship and grant aid they support cover much of the cost of college education for lower- and middle-income students, that those who do incur debt graduating from our member universities borrow less than their peers at other institutions and are better able repay their debt after graduation, and that there is much the federal government could do to prevent students at all institutions from going into unsustainable debt. The simple truth is that, for every dollar the federal government provides in student grants, America’s leading research universities provide $6. 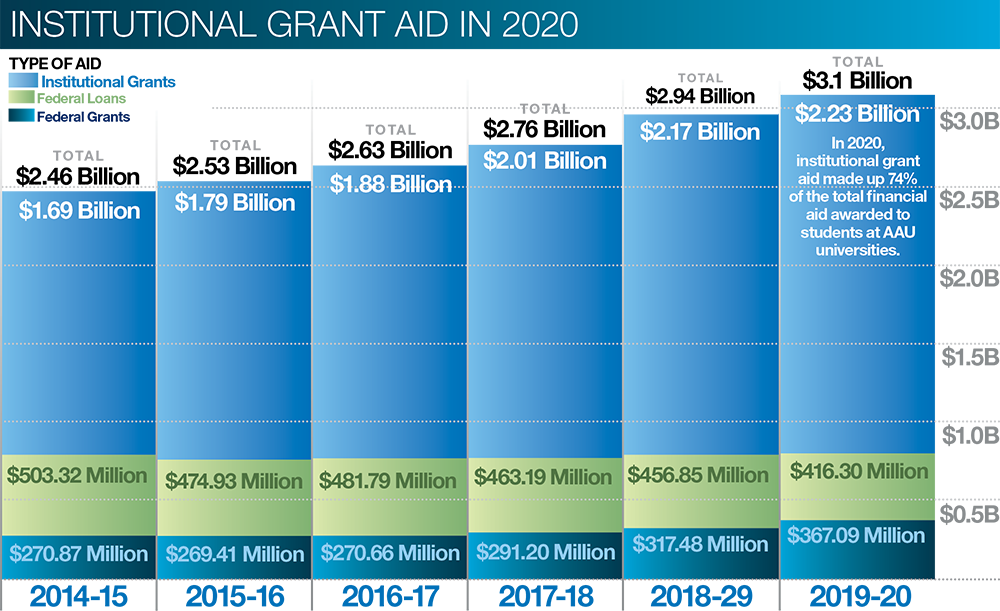 The Net Cost of Attending College

When discussing this issue, commentators often point to the so-called “sticker price” of a college education – usually rendered as the school’s published annual tuition rate – and they note that the rate of increase in those published prices has exceeded inflation in recent decades. But at America’s leading research universities, most students do not pay this price. According to College Insights, 57% of AAU graduates earn their degrees debt-free. This in large part is due to grant aid (need-based grants and merit-based scholarships) from the universities themselves; less than 1/6 of the grant aid received by students at AAU member schools comes from the federal government. In the 2019-2020 academic year (the most recent available statistics from the U.S. Department of Education), 1.9 million AAU undergrads received $2.23 billion in university-provided grants and scholarships, $367 million in federal grants, and $416 million in federal loans. 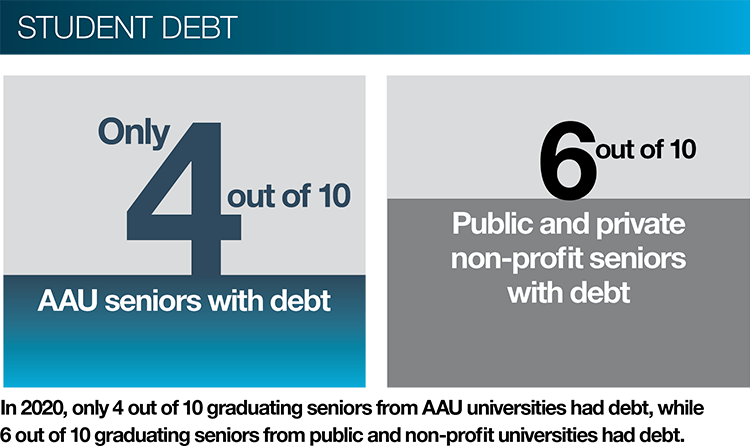 In contrast, only slightly more than 40% of graduates of all other four-year nonprofit colleges and universities (both public and private) in the United States graduate debt-free. And the per-capita debt of AAU undergraduates stands at $11,036 per student – significantly less than the $17,150 per-capita debt for undergraduates at all other four-year nonprofit colleges. 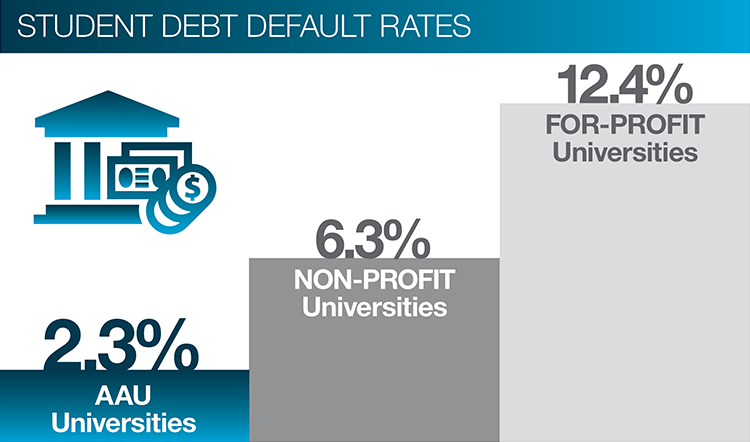 AAU graduates who incur debt during their studies are also better able to repay it than their peers at other schools. According to figures from the United States Department of Education, only 2.3% of AAU alumni default on their debt within three years of earning their undergraduate degree; the default rate for all non-profit four-year institutions at three years after graduation is 6.3%. The default rate for four-year for-profit universities is even higher at 12.4%.

This owes, in part, to the fact that undergraduates at America’s leading research universities are much more likely to complete their bachelor’s degrees on time. 84% of students who start college at an AAU institution complete their degree within six years (the standard measure for graduation rates). Only 57% of students who start at all other four-year nonprofit colleges graduate within six years – and four-year for-profit universities have an abysmal 38% completion rate. 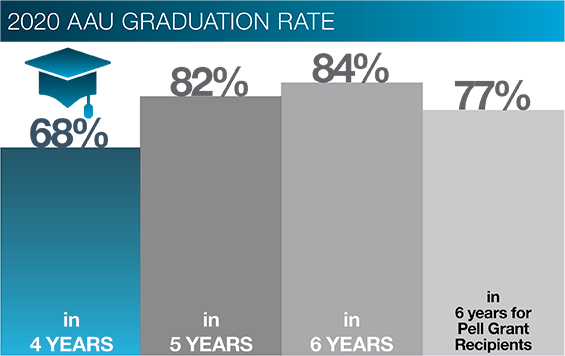 Endowments and the Scholarship Tax

Many commentators both for and against President Biden’s forgiveness plan have argued that colleges should spend more of their endowments to cut tuition, or that endowments should be taxed to pay for loan forgiveness. Leaving aside the legal and practical impossibilities of spending funds legally restricted by their donors for specific purposes, what these commentators fail to realize is that, without those endowments, tuition costs would be higher. According to the American Council on Education and the National Association of College and University Business Officers, most endowment earnings – 65% – already go to support student financial aid and academic programs. 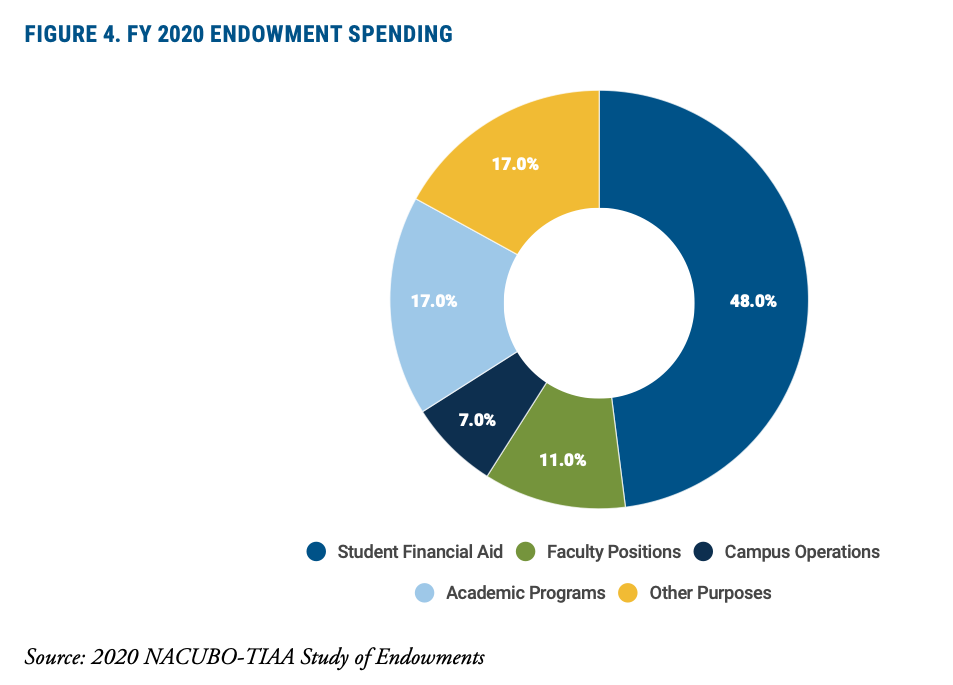 Much of the rest also helps colleges reduce the need for tuition revenue by underwriting professorships and offsetting the costs of student programs, maintaining campus buildings, and other university operations. Liquidating endowment funds would be counterproductive to the very purpose of helping students afford college. And further taxing endowment income is also counterproductive. The 2017 law that provided significant tax cuts to large corporations simultaneously levied a tax on income from the largest university endowments and amounts to a scholarship tax. The approximately $200 million per year that the endowment tax generates for the federal government disappears into its general fund and is not designated to any specific purpose that would help Americans get an affordable college education.

In reality, much of the country’s undergraduate student debt crisis is driven not by AAU members and the other prominent institutions cited frequently in debate, but rather by loans to students enrolled at for-profit universities. Unlike non-profit institutions, for-profit universities provide almost no institutional grant or scholarship aid. The vast majority of their students pay the full published tuition price – necessitating federally backed student loans or private loans for their overwhelmingly lower- and middle-income student bodies. According to a 2019 report from The Institute for College Access & Success, more than 80% of graduates of four-year for-profit universities carried student loan debt in 2016 – compared to approximately 67% for all other four-year college graduates. Moreover, their debt load was much higher – $39,900, on average, per for-profit university grad – than the average loads for graduates of nonprofit private ($31,450) and public ($26,900) universities. Between the higher debt loads and the extremely low graduation rates associated with these for-profit schools, there are thousands of Americans who are burdened by the horrible combination of significant debt with no degree to show for it.

AAU member universities are working hard to ensure their students do not graduate encumbered by unmanageable debt – but we understand that student debt is a problem for the entire country. The federal government should begin addressing it by doubling the maximum annual Pell Grant award to help restore the purchasing power the program had when it was first established 50 years ago. Boosting the Pell program will also expand its eligibility criteria, ensuring access for more middle-class families. Additionally, Congress should reform the federal student loan program, including lowering student loan interest rates and eliminating origination fees. Finally, state governments should reverse their decades-long disinvestment in public colleges and universities and provide new resources to these vital institutions, which educate the majority of American degree-holders.

Unsustainable student debt loads are not only massive burdens on individual borrowers and their families, but an overall drain on our society. Regardless of one’s view of this one-time loan forgiveness, it is undeniable that student debt is a problem for the United States. America’s leading research universities will continue to provide life-changing education and world-changing research and innovation while ensuring Americans from all walks of life can afford a high-quality college education. We urge Congress and state governments to pitch in to help ensure the dream of a college education does not turn into a nightmare of debt for any American.

Barbara R. Snyder is president of the Association of American Universities and a former president of Case Western Reserve University