Despite its crude looks, a student-built experiment called ANDESITE is actually on the leading edge of a new trend: studying space using “swarms” of inexpensive, lightweight mini-satellites that are cheap to build and cheap to launch.

ANDESITE is on track to launch some time after March 1, 2018, as part of a satellite “rideshare” coordinated by NASA’s Educational Launch of Nanosatellites (ELaNa) Project. It’s a teaching mission first: roughly 15 Boston University students, including Project Manager J. Brent Parham (ENG’18) and Project Engineer Maria Kromis (ENG’17), are working on the project at any given time, gaining the kind of hands-on satellite-building experience that aspiring space engineers usually have to wait years for.

“It was very important for us to have a true science mission. When it’s launched into space, we’re doing fundamentally new research,” says Brian Walsh (GRS’09,’12), assistant professor of mechanical engineering, who heads up the project with Joshua Semeter (ENG’92,’97), professor of electrical and computer engineering. 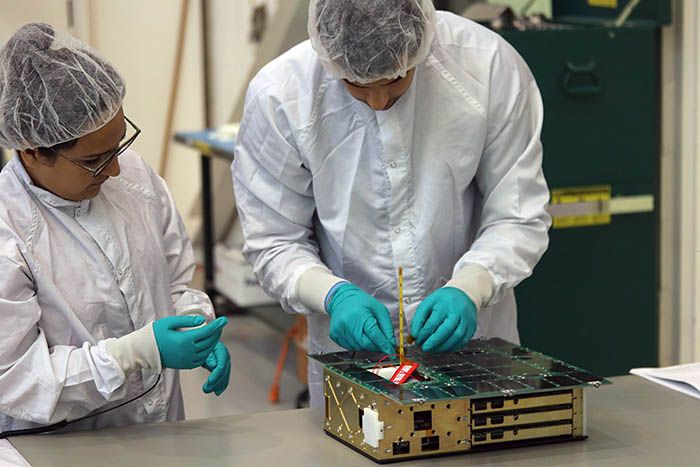 When solar wind particles hit the Earth’s magnetic field, they cram together and funnel through lanes marked off by the Earth’s magnetic field lines, like commuters squeezing through a bank of subway turnstiles. Then, they drop down on the atmosphere, generating electrical currents that make the glowing, multicolored aurora—but can also wreak havoc on radio communications and electrical systems below. By measuring the strength and direction of the magnetic field some five hundred kilometers above Earth, ANDESITE will help reveal how those electrical currents move energy into the atmosphere, which could help researchers provide better predictions about potentially dangerous solar storms and understand how the aurora gets its peculiar ripples and whirls.

Until now, space physicists have studied these questions using single, high-precision spacecraft. But solo satellites have limitations, even when they are outfitted with top-of-the-line sensors, says Parham, who presented a mission update at the American Geophysical Union’s Fall Meeting, on December 13, 2017.

“If you’re flying one sensor through something really fast on a satellite, you’re just getting a time series of data,” says Parham. But because the aurora is always changing, it’s impossible to tell the difference between changes over time and changes over space: they are all mixed up together.

The satellites will take positions a few kilometers apart, circling the Earth every 90 minutes. Combining readings from all eight spacecraft, space physicists will be able to piece together a full picture of the aurora, even without exquisitely sensitive—and exquisitely expensive—parts. “We don’t need a finely tuned Ferrari: We advance our science with eight Camrys,” says Walsh. 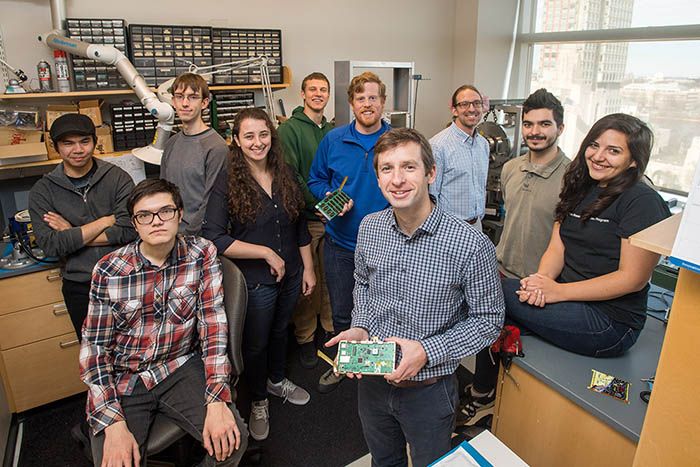 A group at BU led by Brian Michael Walsh (GRS’09,’12), at front center, holding node, is developing a wireless network (or “swarm”) of mini spacecraft. They contain magnetometers to measure the fine-scale structure of the Birkeland currents that create the Northern Lights. The group has just passed the final steps of testing and will be launching into orbit in March. They will be presenting on the mission at the AGU conference on Dec 13. Photo by Cydney Scott

Inside each of ANDESITE’s eight circuit-board satellites is a smart compass, made up of a magnetometer which reads out the strength of the magnetic field in three directions, plus a GPS device and a gyroscope, which tell where the satellite is and which way it’s pointed. Also onboard: a “baby microprocessor,” popular with electronics hobbyists, a battery to store up energy from the solar cells, and the tape-measure antenna, which will send data back to the mothership. The total cost of parts for one mini-satellite: about $500.

The deployer also slashes the cost of launch to pennies on the dollar: The face value of a rideshare “ticket” for a mission like ANDESITE is about $200,000, compared to at least $20 million to fly solo, says Parham. ANDESITE’s spot is sponsored by NASA’s ELaNa program.

These pocket-sized satellites are not about to replace the full-sized, bespoke flagships for every application, but Parham says that he’s eager for ANDESITE to help prove that little satellites can do big science. “There’s something to be done with the cheap stuff,” Parham says. “You just have to realize that it’s not either/or.”

Small Wonders was originally published on the Boston University website.