Standing in train stations or riding the train, sitting circled on a city sidewalk, or conferenced around the breakfast table at the hostel, the 11 Northwestern students on this year’s Global Engineering Trek (GET) to Germany never missed an opportunity to discuss the engineering marvels and energy innovations they learned about over their 11-day expedition.

The students visited universities, research labs and innovators of industry across Northern and Southwest Germany this September as part of Northwestern’s second GET on Sustainability co-sponsored by the Institute for Sustainability and Energy at Northwestern (ISEN) and the McCormick School of Engineering Global Initiatives Office.

The program gives up-and-coming STEM students the chance to travel early on in their rigorous academic careers and see what real-world opportunities and applications exist in their fields. Trip organizers share the student resumes and CVs with recruiters and talent scouts at a variety of site visits, and the students are encouraged to network and exchange contact information with the hosts.

“We put students in the same room with high-level executives in companies and researchers who are doing work on the ground. Students get their business cards and chat them up and show they’re interested and eager to apply what they’re learning in the classrooms at Northwestern to somewhere else, to somewhere in another country. We stress to them to take advantage of this opportunity, and they have, and they do,” said Mike McMahon, Senior Communications Manager for ISEN.

The students, rising sophomores ages 18 – 20, came from a range of specializations including chemical, industrial, mechanical, environmental, electrical, and biomedical engineering. The trek itinerary offered something for every specialization.

“I'm really looking forward to learning about electric vehicle infrastructure, especially as it relates to energy storage, because I feel like one of the most common threads from last year that we didn't quite answer was the issue of how to deal with the storage of renewable energies, like wind or solar, so that they could be as dependable as on-demand gas or coal,” said Javan Whitney-Warner, 20, an incoming junior who took part in last year’s inaugural trek to Frankfurt and Heidelberg and returned this year as a team leader. 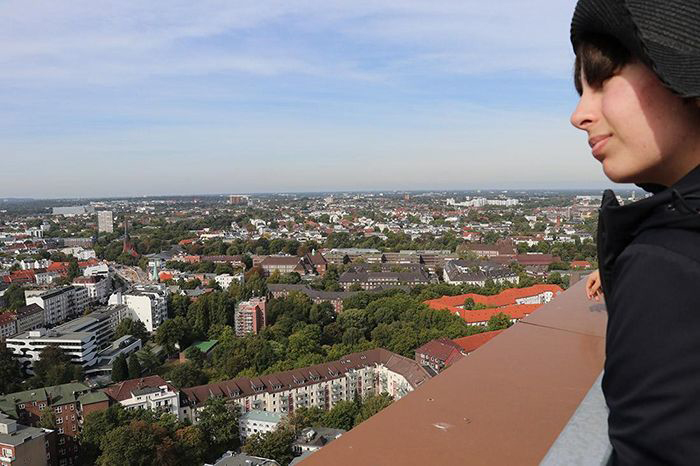 Javan Whitney-Warner, a chemical engineering major, overlooks the city of Hamburg from the rooftop home of the Universität Hamburg weather mast, Sept. 17, 2018. (Photo by Jillian Melero).

Last year’s trek brought students to Heidelberg and Frankfurt, centers of climate consciousness and renewable energy. This year, ISEN  explored new partnerships with the University of Hamburg, home to the Center for Earth System Research and Sustainability.

The university is part of Germany’s Cluster of Excellence in Integrated Climate Systems Analysis and Prediction (CliSAP) which is a multi-institutional partnership focusing on researching and modeling global climate systems, mitigating global climate change, and researching issues on manmade impacts on climate.

CliSAP is funded by the German Research Foundation (DFG) and, according to Martina Bachmann who works within the Center for Earth System Research and Sustainability at the University of Hamburg, they have recently been approved for funding for the next seven years.

“Whether or not climate change is real isn't really a debate that’s going on here. It hasn’t been going on here for a long time. The science is settled. Everyone from policymakers to businesses to individual citizens jumped on board long ago. Sometimes in small ways. Sometimes it’s people turning off their cars when they come to a stop light and then starting them back up when they get a green light. And sometimes it’s businesses taking a hard look at ways to cut carbon emissions however they can. Sustainability obviously makes environmental sense—it’s good for the environment, and it’s great for public health to cut down on emissions—but it’s also good for business,” McMahon said.

Other CliSAP partners include the Max Planck Institute for Meteorology, focused on climate research and modeling and the Institute for Coastal Research at the Helmholtz-Zentrum Geesthact (HZG) which were both on the Hamburg itinerary, and the German Climate Computing Center.

The visit to HZG included tours and presentations from their Materials Research department. Among HZG’s many projects are developments in lightweight vehicle parts, bio metallic medical implants, memory polymers, and hydrogen fuel cells.

“There are so many different fields and professions that sustainability can have a large impact in. If I was thinking about ways to increase sustainability in general, I would never think of replacing car frames with lightweight magnesium alloys,” said Derek Magruder, 19, an electrical engineering major from Lake Stevens, Washington. “Yet that is what some people work on in striving towards sustainability. No matter what field any of us engineering students enter after graduating, a career path focused on sustainability can be open to us,” Magruder said. 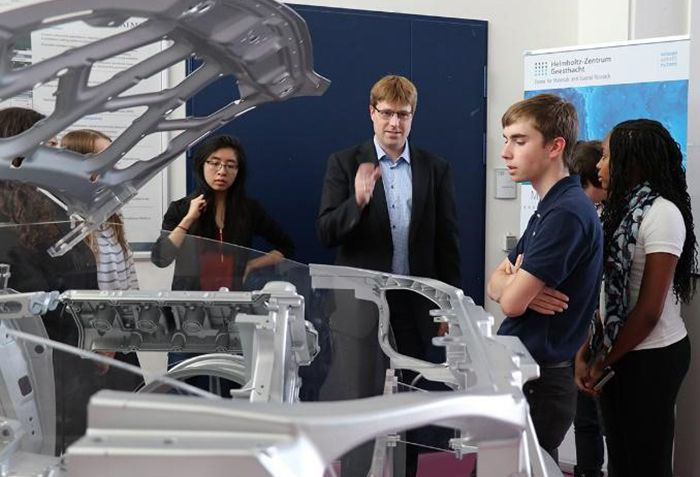 Derek Magruder, an electrical engineering major, examines a display of lightweight car parts under development at the Helmholtz-Zentrum Geesthact Institute for Materials Research in Hamburg, Germany Sept. 17, 2018. Reduced weight adds distance to the range of an electric vehicle. (Photo by Jillian Melero).

The students’ four-day visit to Hamburg also included a trip to the headquarters for Greenpeace Energy, a cooperative energy developer and distributor getting the majority of its electricity from renewables utilizing wind turbines and solar cells.

“This experience is for students of course, first and foremost, but we—ISEN, Northwestern faculty, and other administrative offices who are on this trip—are also out here to establish partnerships with a lot of these places we’re visiting,” McMahon said. “It’s a chance for students to learn from them and get a behind-the-scenes look at the way they operate and see what drives them, but it’s also a chance for us to sit down with the leaders of these institutes and businesses and explore opportunities for partnership around what we’re doing at Northwestern when it comes to energy and sustainability.”

Visits included Heidelberger Druckmaschinen, a long-time operator and manufacturer of printing presses that expanded beyond its previous business model when it began manufacturing AC/DC converters for Porsche and Audi in 2012 and has since gotten into the development and construction of wall box charging stations for electric vehicles. 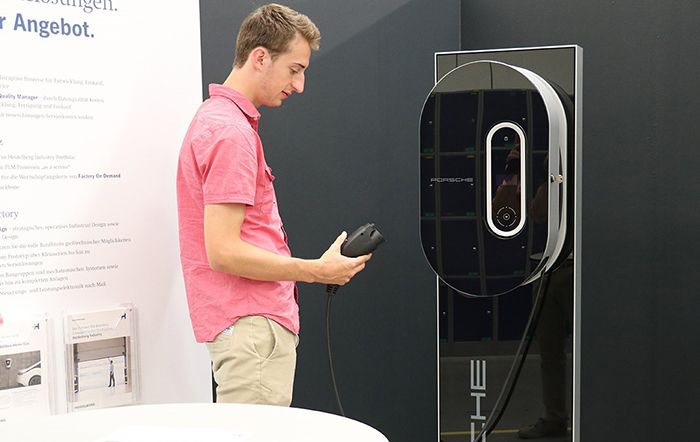 Materials science and engineering major, Sam Asa, checks out the Porsche electric vehicle charging station produced by Heidelberger Druckmaschinen in Heidelberg, Germany Sept. 20, 2018. The units retail for around $2,500 US. (Photo by Jillian Melero).

Heidelberg University’s Center for the Environment welcomed Northwestern for the second time, bringing students into their Groundwater Research Laboratory, as well as their Carbon Observation System Laboratory.

Environmental engineering student, Andrea Lin, said the trip to juwi made the biggest impact on her.

“One of the concerns was, can we ever be 100 percent renewable? Is it possible for renewable energies to replace all of the world’s consumption?” Lin wondered.

The answer she received there was a definitive yes.

“Almost [each] type of renewable energy on its own can replace the world's current energy consumption. All those sources combined could definitely provide more than enough energy for the entire world, and that really encouraged me that 100 percent renewable energy is possible for us in our lifetime,” Lin said.

DAW was recognized by The German Chemical Industry Association (VCI) with a “Responsible Care Award” in August for creating and implementing a Sustainability Data Sheet which, since introduced in 2012, has become an industry standard, as well as the company’s Product Environmental Footprint report.

“When I think paint company I don’t necessarily think ‘breakthrough innovation in sustainability,’” McMahon said. “But it’s really surprising to go there and see that they are. They have a chief innovation officer who is dedicated to leading the company to innovate, particularly around issues of sustainability, which is really unique.”

The BASF tour, back on the itinerary from last year, brought students through the company’s environmental monitoring systems and massive waste incinerator – new stops this year.

ABB’s presentations, lab, and manufacturing tours included discussions of modular automation, building automation, sensors, and monitoring for power grids and future robotics, complete with a hands-on demonstration from the YuMi (“you” and “me”) robot—as well as research and development for future power devices and sensor solutions for internet of things integration. 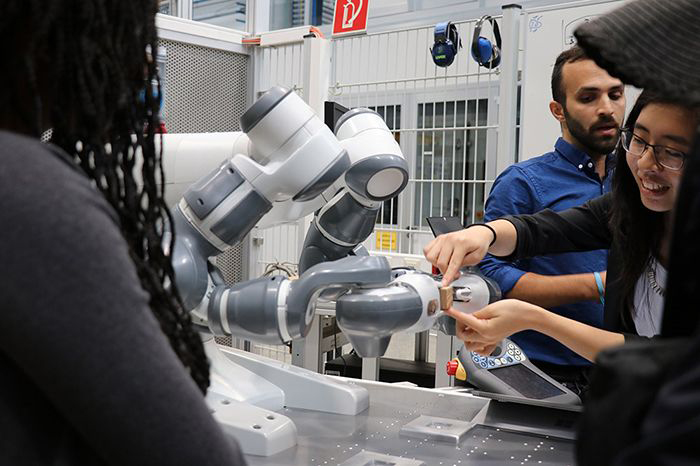 Environmental engineering major, Andrea Lin, interacts with the YuMi robot at ABB near Heidelberg, Germany, Sept. 24, 2018. The dual arm robot utilizes collaborative programming, where the human user can teach the robot what to do by entering commands through a tablet and positioning the arms and grippers directly. (Photo by Jillian Melero).

And partners at NEC Laboratories discussed the systems and applications for machine learning, or artificial intelligence.  Some of their other products and solutions involve big data analytics and smart energy management systems.

After 11 days of site visits, presentations, research, and discussions, the GET group was ready to attack the upcoming term at Northwestern, buoyed by what they’d seen, and armed with new ideas.

“It was an amazing opportunity to learn about sustainable energy from another country’s perspective and to see different companies and different research centers with the same collective goal, which is to learn about climate change and what we can do to combat the results of it to protect our planet, and conserve it for future generations,” Lin said.

ISEN’s Global Engineering Trek to Germany is one of two Treks currently offered. While the Germany trip focuses on sustainability, the newly launched Trek to Israel examines water management issues. 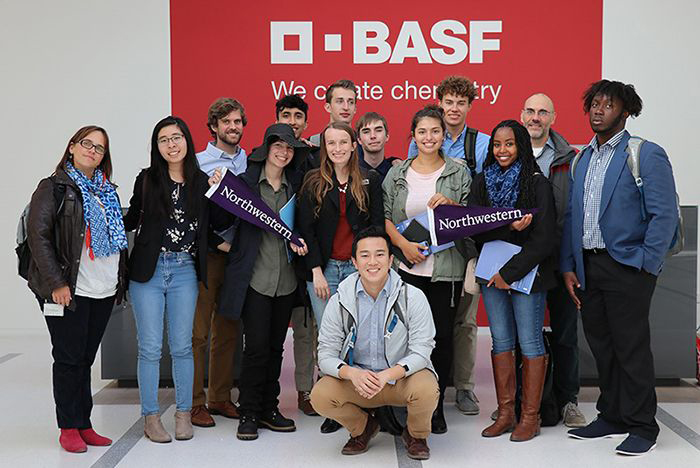 Students got a behind-the-scenes look at a suite of organizations during the Global Engineering Trek through Germany including BASF, one of the largest chemical companies in the world. (Photo by Jillian Melero).

Northwestern Engineering Students Return to Germany for Lessons on Sustainability was originally published on the Northwestern University website.