Parrotfish—brightly colored, roving vegetarians of tropical oceans—are a precious element of the marine ecosystem in the Caribbean waters off the coast of Belize. It’s not because schools of resplendent parrotfish add a swirling rainbow of colors to the turquoise waters, although they do that too.

Instead, they have a much higher calling—playing an essential role in protecting the health of the world’s second largest barrier reef system. Insatiable plant eaters, parrotfish spend most of their lives munching on grasses, and most importantly for the health of the reefs, algae, which if left unchecked can strangle the life out of coral.

In the fall of 2017, Hayley Goss and Jacob Jaskiel were in Belize collecting seagrass blades from underwater meadows in the warm, shallow coastal waters of the western tropics. Goss and Jaskiel, student researchers at Boston University, weren’t thinking about plastic pollution in the ocean when they put on their snorkel gear and dived down to the seafloor, snipping away at the seagrasses—a species called T. testudinum—swaying in the underwater breeze of the currents. Instead, they were thinking about salad dressing.

“Parrotfish are vegetarian, so we were wondering if they prefer to eat their seagrass with salad dressing or not,” Goss says.

Salad dressing is a term that Goss and Jaskiel coined in collaboration with their faculty advisor, BU marine biologist Randi Rotjan, to describe the collection of small organisms that take up residence on the surfaces of seagrass. These organisms, called epibionts, encrust themselves on the grass blades and, the trio hypothesized, might have an influence on which blades the parrotfish choose to eat.

Originally, Goss and Jaskiel were collecting seagrass blades with the intention that, back at Rotjan’s laboratory in Boston, they would count up the number and different kinds of epibionts—the “salad dressing”—on each blade.

“We brought back 16 different blades from different seagrass beds, and we thought all we were going to do was taxonomically characterize the organisms we found on them,” Jaskiel says. “In addition, the number of parrotfish bite marks on each blade would help us quantify which blades were most appetizing.”

But that’s not what happened. Instead, Goss had a sample under the microscope when she caught sight of something alien.

Jaskiel peered into the microscope and did a double take of his own. “Right away, I saw it.” It was undeniably a fiber. A microfiber, made of plastic, by the looks of it. But…how?

A Finding They Wish They Didn’t Have to Make

The island of Turneffe Atoll, home to seagrasses and the parrotfish that eat them, is well positioned as a research station because of its proximity to Belize City and the Belize Barrier Reef—the largest reef making up 80 percent of the Mesoamerican Barrier Reef System, which stretches over a total of 620 miles from the Yucatán Peninsula to Honduras.

Seniors in BU’s marine science program, Goss and Jaskiel traveled to Turneffe Atoll to do fieldwork for Rotjan’s lab as part of a “marine semester” during the fall of their junior year. The marine semester is a mobile learning opportunity for rising marine biologists to take classes and do research while they rotate around some of the world’s premier scientific outposts.

“This all started because I was looking for students to help sort plankton in the laboratory,” says Rotjan, a research assistant professor of biology in BU’s College of Arts and Sciences. Her lab has various research interests but has taken a turn toward understanding differences in remote versus urban areas.

Rotjan is a staunch advocate for jump-starting young scientists’ careers by involving them directly in her research, and by encouraging them to come up with new hypotheses and research interests of their own. When Goss and Jaskiel, students in her marine biology course, each jumped at the chance for hands-on research experience, Rotjan offered them both lab spots.

“We have a motto in the lab,” Rotjan says. “It’s ‘a rising tide floats all boats,’ and that’s really our philosophy on the power of teamwork.” Lab members, she says, also thrive on puns. “Puns really drive the research…our scientists are a bunch of conch-istadors, lob-stars. We have fun together.”

Jokes aside, when they started out sorting plankton, Goss and Jaskiel, who knew each other as acquaintances from their marine biology classes, never imagined that in joining Rotjan’s lab, they would become co–first authors on a landmark study describing microplastic pollution in marine plants, a “first” for the scientific world.

Ironically, they say that it’s a finding they wish they didn’t have to make. 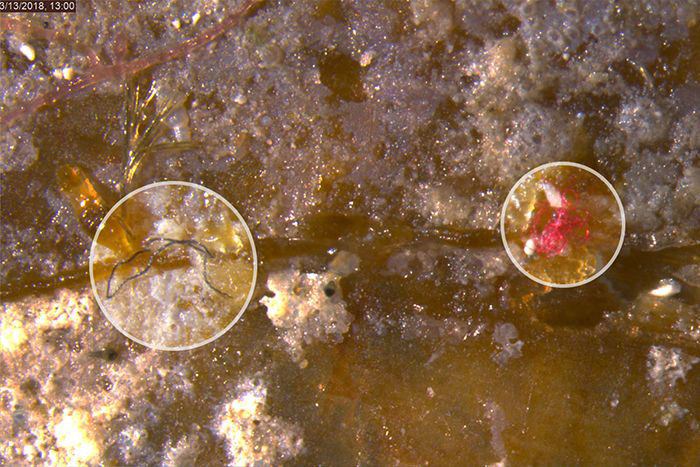 Looking at their first seagrass sample under the microscope, the sight of a thin, bright red microfiber stopped Goss and Jaskiel in their tracks. A black or gray microfiber is also visible to the left of the red one. Photo: Courtesy of the Rotjan lab

In Rotjan’s lab, freshly returned from their fieldwork in Belize, Goss and Jaskiel were in a state of shock as they stared into the microscope. What was a thin, red microplastic fiber doing in the middle of their seagrass sample?

“At first, we were looking every way for this to not be true,” Goss says. “We tried to see if somehow the sample had been contaminated.”

But, strangely, the red microplastic fiber was not exactly stuck on the surface of the sample. It was embedded and partially crusted over by epibionts.

“At that point, we knew these microplastics were not there because of any sample contamination,” Jaskiel says. “There were living layers of organisms growing over the microplastics.”

“Any residual hope that this was not true was squashed when we documented that epibionts had actually grown over the microfibers,” Goss says.

Rotjan compares the effect to sedimentology. She says the epibionts grow layer over layer, the same way sediments or rocky layers are deposited on the earth. Just like we can judge the age of an object depending on where it’s found in the rock layer, Rotjan, Goss, and Jaskiel determined that the microplastic fibers, overgrown by epibionts, had been there for a long time.

As they surveyed more of their samples, they found more of the same, except it wasn’t just red microfibers, it was microplastic fibers in all colors, shapes, and sizes, and bits of tiny plastic shards, and impossibly small microbeads of plastic. There were dozens and dozens of pieces of plastic, from a vast number of sources, enmeshed on the seagrasses. In total, Goss and Jaskiel found that 75 percent of the seagrasses they collected from the Turneffe Atoll contained microplastics.

The findings, published in Marine Pollution Bulletin, reveal an entirely new vehicle for microplastics to travel into the food chain. Although it’s already been shown that some marine species ingest plastics themselves—passing those plastics up the food chain through their predators—until now it wasn’t thought that vegetarian sea creatures were likely to be a point for plastic to enter the food chain.

After digging through all the scientific literature in search of any related research, Goss and Jaskiel say their work is the first discovery of microplastics on aquatic vascular plants—meaning plants that contain water and have specialized leaves, stems, and roots. And, they believe, this is only the second discovery of microplastics on marine plant life anywhere in the world.

“We very much stumbled upon something that no one has ever written about before,” Jaskiel says.

Microplastics, it appears, have taken up residence inside the lowest rungs of the ocean’s herbivore food chain, the tiny plants themselves that nourish sea-dwelling vegetarians like parrotfish. The realization spells trouble for every link of the food chain leading all the way up to humans, whose seafood consumption—including species like parrotfish—has doubled within the last 50 years.

“This was not a fun, cool discovery; it’s describing a human impact that we’ve never really considered,” Goss says somberly. “Of course, that being said, it’s better to know now and try to address what’s happening in our world.”

“Everybody Is Playing a Role”

Rotjan says the microplastics they found on the seagrasses likely arrived through a number of different known pathways for plastic pollution to leach into the marine food chain.

Plastic begins in the fossil fuel industry, where crude, carbon-rich oil is refined into polymers that can be molded into forms of virtually any shape or size. Since plastic doesn’t react with other chemicals, it never fully degrades.

Big pieces of plastic debris, like single-use packaging containers and road tires, Rotjan says, break down into smaller and smaller pieces until they are microplastic chips. Plastic microbeads, which were once popular in facial and body exfoliating scrubs but are now banned from cosmetics in the United States, wash down the sink and shower drains.

And, Rotjan says, microplastics are literally woven into the clothes we wear. Garments made of synthetic materials like nylon, polyester, acrylic, and spandex (anything not made of pure cotton or wool, basically) contain hundreds of thousands—if not millions—of microplastic fibers. Why does that matter? Each and every time we do a load of laundry, tens of thousands of microplastics are drained out with the wash water. Plastic waste, flowing through our plumbing systems and too small to be filtered out by water treatment facilities, is introduced to waterways which, eventually, all lead to the ocean.

Rotjan says if you regularly clean noncotton or nonwool clothes in a washing machine, there’s no way around it. Over the course of our lives, we are contributing millions—perhaps billions—of microfibers to the world’s oceans.

Looking under the microscope, the team also got their answer about whether parrotfish prefer seagrasses with lots of “salad dressing” or not. When they counted up the number of parrotfish nibble marks on the seagrasses, the data suggests that the more layers of epibionts a seagrass contains, the more appetizing it is for parrotfish. Combined with their realization that the epibiont layers help enmesh microplastics, the trio says seagrasses with the most salad dressing—made up of epibionts and microplastics—are the most likely to be eaten by parrotfish. What happens when the microplastics enter the digestive tracts of the parrotfish? Are they expelled, or absorbed into their bodies?

“There is still so much we don’t know. The science of microplastics is just beginning,” Rotjan says.

If Goss and Jaskiel’s seagrasses reveal anything, it’s that microplastics are persistently finding a way right back to us, the species that launched them into the oceans, through the circle of life, by arriving back into the bellies of humans who eat seafood. And so, the cycle goes on. Plastic, once hailed as a wonder material, is now inescapably part of our world—and by extension, part of us.

“Finding plastic-free food is going to be one of the many challenges facing modern aquaculture,” Rotjan says. “We need to do better than just pick our poison—although we’ve created a toxic world, we have the potential to fix it.”

If there is one bit of light to hold on to, it’s that Goss and Jaskiel’s experience in Rotjan’s lab has cemented their commitment to research.

With one groundbreaking scientific discovery already under their belts, and graduation coming in May 2019, Goss and Jaskiel say they are just getting started on what they hope to contribute to the world through marine research.

“The thing is, everybody is playing a role in plastic pollution whether they know it or not,” Jaskiel says. “And it comes back to affect everybody too. It’s humbling, but it’s very real and it’s only going to get worse until we address the problem.”

Have Your Plastic and Eat it Too was originally published on the Boston University website.