Kuang has spent many hours over the last year doing research in the spinal cord injury translational lab of Dr. Prithvi Shah. Although he was very active in this laboratory’s experiments throughout the 2016-2017 academic year, and has been immersed in research full time this summer, Aaron clearly remembers being daunted by the prospect of starting undergrad research, wondering what an undergrad could contribute. After finding a position with the Shah lab through Undergraduate Research & Creative Activities (URECA), he found out.

Kuang soon discovered for himself that “you can definitely contribute in ways that you didn’t originally plan to.” Working closely with the other team members of the Shah lab, and becoming known for his “can-do” attitude, Aaron has played a key part in helping develop an ADATS (Automated Device for Assessment and Training of Skilled locomotion) device that will be presented by the Shah lab at a Society for Neuroscience meeting in November. Aaron also gained experience using novel 3D reconstruction software for the project, as well as in working with spinal cord tissue, doing data collection and data analysis for an epidural stimulation study, and in animal handling.

At Stony Brook, Aaron has also been involved as a Teaching Assistant for Physics (PHYS 121) and for Genetics (BIO 320) and has volunteered at Stony Brook hospital in the Hand Therapy clinic. Aaron plans to go to medical school, after taking a gap year.

Aaron is a resident of Brooklyn who attended Stuyvesant HS prior to coming to Stony Brook and is a first-generation college student. His hobbies include cooking, and handball. 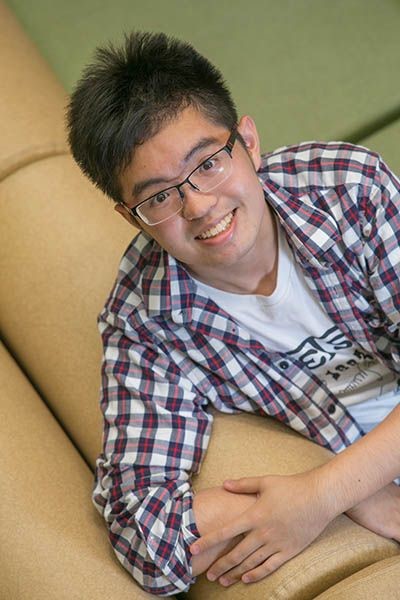 “What I’ve gained is definitely something that I would never have accomplished or learned if I stayed with lectures and introductory biology labs only.” Aaron Kuang, biology major at Stony Brook Unversity.