After ten years of studying brains donated by families of deceased military servicepeople, football players, and other contact-sport athletes, researchers from Boston University School of Medicine (MED) and the VA Boston Healthcare System have amassed more than 600 brains, a collection they say that’s grown large enough to enable meaningful analysis of the genetics related to chronic traumatic encephalopathy (CTE).

Their latest discovery—about the CTE-related significance of genetic variation in a gene called TMEM106B—could explain why similar levels of head trauma in different people can cause some of them to suffer more drastic symptoms of CTE than others. The findings are described in a study published on November 3, 2018, in Acta Neuropathologica Communications.

“In order to understand how genetic variants influence disease or severity, you need hundreds of cases,” says Ann McKee, co–senior author on the paper, MED professor of neurology and pathology, chief of neuropathology at the VA Boston Healthcare System, and director of the BU CTE Center.

With more than 600 participants in the brain bank and counting, “we’ve reached a critical mass,” McKee says. “I expect to find a flood of new genes that influence the pathology of CTE. This is just the beginning.”

Today, CTE can only be diagnosed after death by studying a person’s brain. And until now, it’s been unknown why repeated head injuries can lead to a range of mild to severe CTE symptoms between individual college and professional athletes. The newly discovered genetic association between CTE and TMEM106B could someday help predict which people, while they are still alive, are most likely to develop severe symptoms of CTE, including dementia and the buildup of phosphorylated tau (p-tau) protein, a feature also associated with other neurodegenerative disorders like ALS, Alzheimer’s, and Parkinson’s.

“Among athletes who developed CTE pathology, those with the ‘risk’ variation of TMEM106B were 2.5 times more likely to have dementia and increased levels of p-tau,” says Jesse Mez, co–first author on the paper, MED assistant professor of neurology, and a member of both the Alzheimer’s Disease and CTE Centers at BU.

“We focused on this gene because of its role in altering brain pathology in other neurological diseases and its role in inflammatory responses,” says Stein, who is a physician and neuropathologist at VA Boston Healthcare System, MED assistant professor of pathology and laboratory medicine, as well as associate director of the neuropathology core of the BU Alzheimer’s Disease Center.

From the brain bank—which first started recruiting brain donations from families of deceased athletes in 2008 in coordination with the Concussion Legacy Foundation and its founder, former professional wrestler Chris Nowinski—the team analyzed TMEM106B and evidence of CTE in Caucasian football players, a sample size of 86 brain bank participants, all of whom had been diagnosed with CTE.

In the search for genetic factors associated with CTE, football players make ideal study subjects because the nature of their head injuries is frequent and relatively comparable across the population, in contrast to people who sustained more random head injuries from military-related blasts or other various traumas.

Given TMEM106B’s association with other neurodegenerative diseases, the team also excluded brain bank participants who had evidence of other related diseases.

A stronger link between TMEM106B and neurodegeneration

Then, they assessed the participants based on several different traits known to be associated with CTE symptoms, including the loss of synapses, dementia before death, and p-tau accumulation throughout the brain.

When they compared the results with data from people who did not have CTE, the team found that TMEM106B does not influence whether or not a person develops CTE.

But among people diagnosed with CTE, they found that the 60 percent with the major genetic variation were significantly more likely to have higher accumulation of p-tau, more severe brain inflammation associated with CTE symptoms, and dementia during their lifetimes.

Taken with previous studies linking TMEM106B to dementia, ALS, and Alzheimer’s and Parkinson’s diseases, the team’s findings further strengthen a connection between the TMEM106B gene and neurodegeneration.

Unraveling the tangle of CTE genetics

Although it’s not precisely known how TMEM106B influences p-tau accumulation and inflammatory responses, the team has a working hypothesis based on what is known.

The TMEM106B gene directs cells to produce proteins of the same name, TMEM106B. In turn, those are thought to play a role in the formation of cell organelles that are responsible for digesting enzymes. Yet too much TMEM106B, which could occur as a result of genetic variation, can make enzyme digestion less efficient. Inside brain cells that play an important role in “cleaning” the brain of damage-related proteins like p-tau, abnormal enzyme digestion could result in the hallmark buildup of the damaging proteins seen in cases of CTE.

“We’re at a place where we clearly know that there’s a link between contact sports and CTE, but we don’t yet have a good sense of the magnitude of that relationship,” says Mez, who is particularly interested in understanding how genetic and trauma-related factors influence dementia risk.

There’s likely a number of genes that contribute on various levels to bring someone from the neurotypical end of the spectrum to a diagnosis of severe CTE. With the number of brain bank participants continuing to creep above 600, more genetic factors related to CTE could be on the near horizon. McKee, who was recently named one of Time magazine’s 100 Most Influential People of 2018, has said the research around brains with CTE could one day influence the popularity of football in America, unless the rules of the game begin to change.

“As your sample size gets bigger, you’re able to identify genes that have smaller and smaller effects,” says Cherry, a postdoctoral fellow at the CTE Center. “It’s an advantage for us that we’re not just operating on clinical diagnoses of dementia, for example, but that we have the actual CTE pathology in front of us to quantify what we’re seeing with the presence of certain genetic variations.”

Why Some People Develop More Severe CTE Symptoms than Others was originally published on the Boston University website. 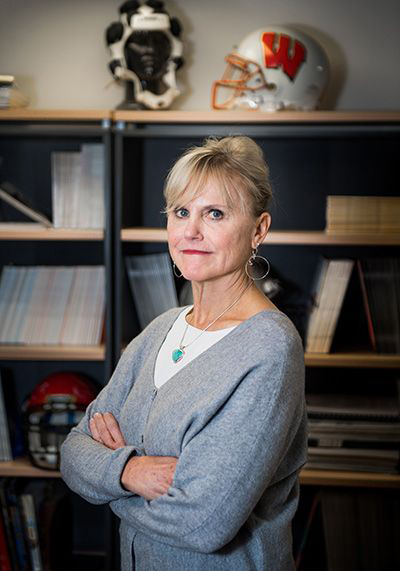 In the years since the brain bank began in 2008, Ann McKee has found that repetitive, subconcussive head impacts in contact sports like football and hockey play a huge role in development of CTE. Photo by Cydney Scott 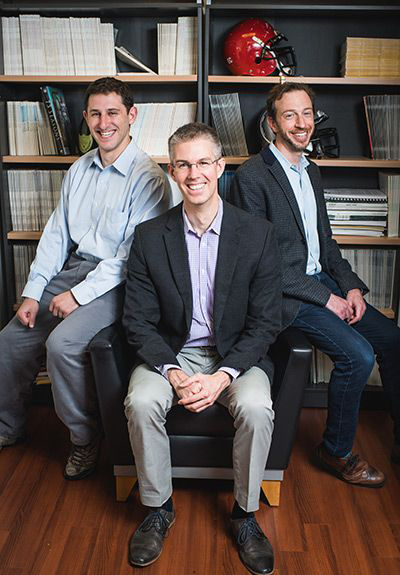 Jonathan Cherry (from left), Thor Stein, and Jesse Mez are part of the CTE Center research team that has discovered one of the first genes linked to CTE symptoms. Photo by Jackie Ricciardi