Linda Beeber stands in a trailer home in Durham and looks out the window. A 6,000-square-foot mansion sits within view. She’s taken aback by the proximity.

Eventually, she snaps out of her reverie and refocuses her attention on the situation in front of her — a mom who suffers from depression and her very young child.

Nearly 50 percent of mothers who face economic hardship, resource challenges, or immigrant struggles in the United States have a high risk for developing depressive symptoms. For women confronting more than one of these variables, that number rises to 64 percent. And while these moms become more and more susceptible to depression, the developmental milestones of their small children — whose brains develop rapidly for each minute that ticks by — are put at risk.

For more than 20 years, Beeber — a UNC nurse scientist — has studied the mental health of more than 1,800 mothers of infants and toddlers. She was one of the first people in the nation to utilize the mother-child dyad in her studies on maternal depression.

“The dyad means that you cannot treat the child without treating the mother and vice versa,” Beeber explains. “They’re seen as a unit. And you work with the observable phenomenon that comes out of the unit.”

“If you have a mother who isn’t very energetic, doesn’t talk much, and has one emotional state all the time — that severely impacts the child,” Beeber says. “Sharing things like interesting toys and emotional expressions lay down the pathways for language and brain development.” But depression gets in the way of these things.

“One of the biggest stressors in families with economic hardship in the United States is that no matter how hard they work, they cannot get ahead,” Beeber adds. “They cannot imagine wealth, and they cannot get their lives to be stable and predictable. And when you continually fail over and over again, it’s almost certain in my mind that you’ll be depressed.”

Observations from the ground

Women are twice as likely to suffer from depression as men — a statistic that Beeber knew all too well from her time as a psychiatric nurse at Virginia Commonwealth University. “I served many women, young and old, who would talk about their depression,” Beeber says. “Some admitted they’d been depressed their entire life, and some would talk about their peers being depressed as well.”

After seeing the trend continue in hospitals across Washington, D.C. and New York, Beeber decided to move into the world of academia and research. She became an instructor at Syracuse University in 1980.

Beeber was interested in using interpersonal psychotherapy (IPT) to treat maternal depressive symptoms, particularly among vulnerable groups including low-income populations, mothers who have little to no social support, single parents, and Latina moms. IPT specifically addresses interpersonal issues — often characterized by feelings of isolation and insecurities about how to create meaningful, emotional intimate connections with others.

In 1997, she began testing this idea within Early Head Start programs in the southeastern and northeastern United States. The mothers in the study struggled with severe depressive symptoms accompanied by other health problems, interpersonal conflicts, financial stressors, and over-working. She and her team of psychiatric mental health nurses visited their homes to not only test the IPT intervention, but help reduce the stigma these women often feel by seeking outside mental health care and offer flexibility around their very busy schedules.

During these early interventions, Beeber realized that for these moms to really benefit the child they needed more than IPT. So she developed parenting strategies to reinforce each mother’s individual strengths, as well as their vigilance toward not letting their symptoms compromise the safety and development of their children.

Before Beeber or one of her nurses begins assessing a mother, they must first develop one vital cornerstone: trust. If the mother, for example, misses her first appointment, Beeber will simply reschedule until they finally connect. “The key is accepting the mother for who she is and where she’s at in life,” Beeber says. “These women are not easy to engage. It takes a lot of skill on behalf of the nurse to build trust.”

Depression interrupts thinking and focus, so Beeber offers the mom some immediate aids to help with that. These types of interventions might be creating reminders, reaching out to others for help, breaking big projects into smaller steps to reduce fatigue, and setting reasonable goals. “This creates opportunities for success, which builds a sense of self-efficacy — a key antidote to depression.”

Then, Beeber helps the mother assess her own stressors to identify the cause of her depression. She starts with the symptoms that bother the mother most and interfere with her developmental support of the child. “We focus on a major life stressor and help her develop solutions to the problem so that she can achieve success in turning around that stressor in her life,” Beeber says.

One mother, for example, shared how her child’s tantrums kept her from going places and socializing with others. To combat this, the nurse developed a self-affirming statement for the mother to utilize: “My nurse told me stick with the plan, other people will understand, my child is growing up.” Then, she asked the mom to practice selectively ignoring the child when he was having a tantrum — which gave her confidence to attempt the strategy on her own, in social settings.

After conquering some stressors, Beeber encourages better and more mother-child interactions — the “fun part” of this research, according to Beeber. “Kids are just amazing,” she says. “They turn around and reward the mother with more vocalization or a smile. It’s like an instant reward system for the mother.”

The final step involves a health plan with information on proper exercise, diet, and sleep. And in just eight to 12 weeks — a timeframe well-suited to the hectic schedule of a low-income parent, according to Beeber — most mothers are able to reduce and better manage their depression.

In less than 12 weeks, Spanish-speaking Latina mothers who received the intervention reduced their depressive symptoms below clinically significant levels. And just six months later, they had more positive attitudes toward their child than mothers receiving standard care services from Early Head Start.

Low-income English-speaking mothers, on the other hand, demonstrated more child-directed speech, stimulating play, and positive involvement with their infant/toddler than those who received only a health education intervention. The results also point to in-home interpersonal psychotherapy as a more cost-effective method than office-based cognitive behavioral therapy, and at least as cost-effective as medication.

Care across the country

Last November, Beeber was recognized for her research by the American Academy of Nursing, which awarded her with an Edge Runner designation for her work with low-income and newly immigrated mothers of infants and toddlers. The Edge Runner program celebrates nurses with innovative ideas that transform the health care system.

“This was an amazing award to get because it recognizes that you’ve made a difference in health care,” Beeber shares. “And you’ve been able to demonstrate not only interventions that work, but interventions that are cost-effective. And that’s hard to do.”

Today, Beeber is using a Hillman Innovations in Care Grant to add a depression and anxiety care component to the Nurse Family Partnership, a national nurse home visiting program to treat, support, and refer women who are depressed across 43 states.

Linda Beeber is the Francis Hill Fox Distinguished Professor and assistant dean of the PhD division and program within the UNC School of Nursing. She is an ANCC-certified psychiatric mental health advanced practice nurse and nurse scientist. 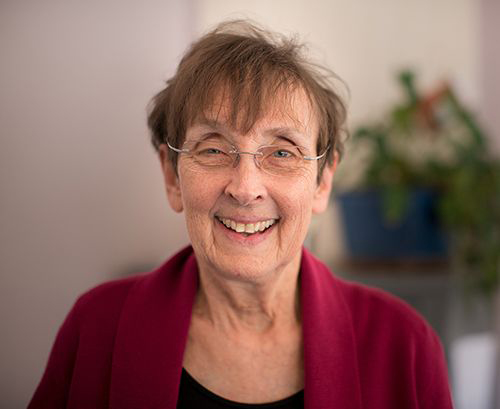 Linda Beeber is the Francis Hill Fox Distinguished Professor and assistant dean of the PhD division and program within the UNC School of Nursing. She is an ANCC-certified psychiatric mental health advanced practice nurse and nurse scientist. Photo by Leon Godwin