Spontaneous recovery from spinal cord injury is almost unheard of in humans and other mammals, but many vertebrates fare better.

The eel-like lamprey, for instance, can fully regenerate its spinal cord even after it’s been severed. Within three months, the lamprey is swimming, burrowing and flipping around again, as if nothing had happened.

In a new study, scientists from the UChicago-affiliated Marine Biological Laboratory report that lampreys recover and regenerate just as impressively after a second complete spinal cord injury at the same location. The study opens up a new path for identifying pro-regenerative molecules and potential therapeutic targets for human spinal cord injury.

“We’ve determined that central nervous system regeneration in lampreys is resilient and robust after multiple injuries. The regeneration is nearly identical to the first time, both anatomically and functionally,” said senior author Jennifer Morgan, director of the Marine Biological Laboratory’s Eugene Bell Center for Regenerative Biology and Tissue Engineering.

Regeneration has been a core area of research at the Marine Biological Laboratory since its founding, particularly in the pioneering work of Nobel laureate Thomas Hunt Morgan, an embryologist and geneticist whose 1901 text "Regeneration" is a classic in the field.

Over a century later Morgan’s lab in particular has led many breakthroughs, including a 2018 study that found genes that aid spinal cord healing in lamprey are also present in mammals.

Morgan’s lab has been focusing on the descending neurons, which originate in the brain and send motor signals down to the spinal cord. Some of these descending neurons regenerate after central nervous system injury in lamprey, while others die.

“We are beginning to isolate individual descending neurons and look at their transcriptional profiles (gene activity) to see if we can determine what makes some of them better at regenerating than others,” Morgan said.

“The ‘good’ regenerators, for example, may express molecules that are known to promote growth during development. That’s one hypothesis,” she said.

Observing how the descending neurons respond to a second injury can help the team tease out the factors required for repeated, resilient regeneration, which could have implications for designing better strategies for treatments aimed at promoting central nervous system re-growth after injury or disease. 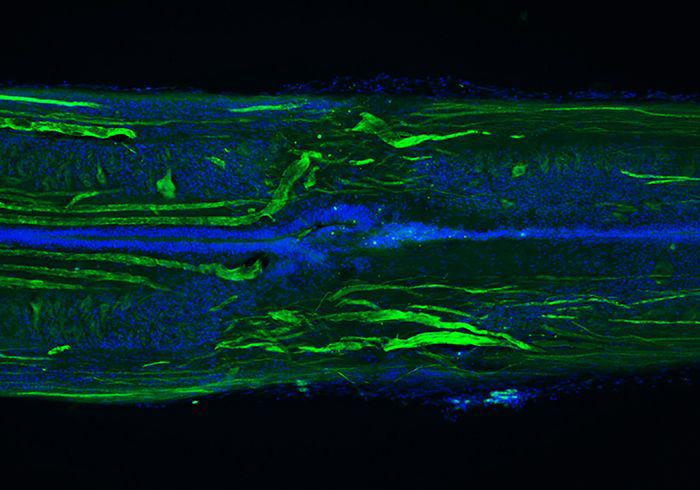 Longitudinal section of a lamprey spinal cord at 11 weeks post-injury, showing many regenerated axons (green) and a repaired central canal (blue tubelike structure). The original lesion site is in the center of the image. Credit: S. Allen and J. Morgan

This study was conducted by first author Kendra L. Hanslik and other former research assistants in Morgan’s lab.

“These are all young scientists, many who have since gone on to graduate school,” Morgan said. “This paper was their labor of love. To go through two rounds of regeneration in the lamprey—that’s nearly six months of waiting before they could collect the [spinal cord] tissue and begin the analysis. I’m really proud of their heroic efforts in pulling off this work.”

MBL Study of Lamprey Could Open Path for Treatment after Disease or Injury was originally published on the University of Chicago website.