The latest advance in wearable tech is a smart, mechanized undergarment developed by a team of Vanderbilt University engineers to help prevent lower back pain.

The performance-boosting supersuit debuted in the U.S. on Aug. 8-11 at an American Society of Biomechanics conference in Boulder, Colorado. The team unveiled it a week earlier at the Congress of the International Society of Biomechanics in Brisbane, Australia. It garnered a Young Investigator Award for mechanical engineering Ph.D. student Erik Lamers, who helped develop the design.

Well over half of all adults will experience low back pain in their lifetimes, and the condition is estimated to cost $30 billion in medical expenses and more than $100 billion in lost productivity in the U.S. annually. Karl Zelik, assistant professor of mechanical engineering and the principal investigator on the project, experienced back pain himself repeatedly lifting his toddler son, which he said got him thinking about wearable tech solutions.

“I’m sick of Tony Stark and Bruce Wayne being the only ones with performance-boosting supersuits. We, the masses, want our own,” Zelik said. “The difference is that I’m not fighting crime. I’m fighting the odds that I’ll strain my back this week trying to lift my 2-year-old.” 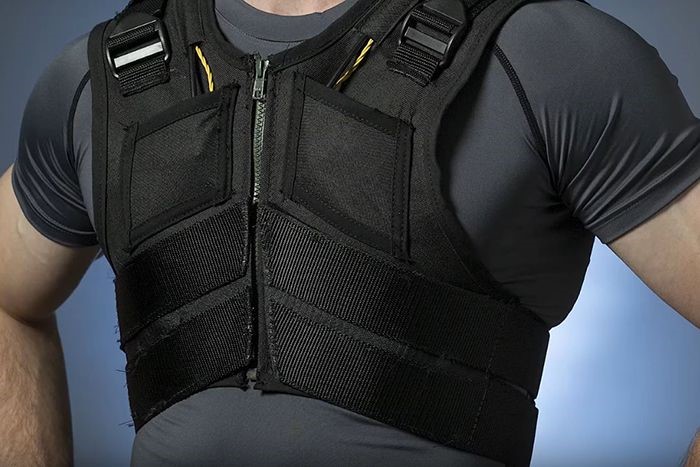 Proof that it works

The team’s testing proves that the smart clothing offloads stress on the low back.
The device consists of two fabric sections, made of nylon canvas, Lycra, polyester and other materials, for the chest and legs. The sections are connected by sturdy straps across the middle back, with natural rubber pieces at the lower back and glutes.

The device is designed so that users engage it only when they need it. A simple double tap to the shirt engages the straps. When the task is done, another double tap releases the straps so the user can sit down, and the device feels and behaves like normal clothes. The device also can be controlled by an app that the team created—users tap their phones to engage the smart clothing wirelessly via Bluetooth.

Eight subjects tested the device leaning forward and lifting 25-pound and 55-pound weights while holding their position at 30, 60 and 90 degrees. Using motion capture, force plates and electromyography, Zelik’s team demonstrated that the device reduced activity in the lower back extensor muscles by an average of 15 to 45 percent for each task.

“The next idea is: Can we use sensors embedded in the clothing to monitor stress on the low back, and if it gets too high, can we automatically engage this smart clothing?” Zelik said.

Dr. Aaron Yang, who specializes in nonsurgical treatment of the back and neck at Vanderbilt University Medical Center, is a co-investigator. He stresses the focus of this new technology is not for treating those with existing back pain but focuses on prevention by reducing stress and fatigue on the low back muscles.

He has seen many back belts and braces and typically meets them with skepticism.

“People are often trying to capitalize on a huge societal problem with devices that are unproven or unviable,” he said. “This smart clothing concept is different. I see a lot of health care workers or other professionals with jobs that require standing or leaning for long periods. Smart clothing may help offload some of those forces and reduce muscle fatigue.”

The project is funded by a Vanderbilt University Discovery Grant, a National Science Foundation Graduate Research Fellowship and a National Institutes of Health Career Development Award K12HD073945. A patent has been filed.

Smart Underwear Prevents Back Stress with Just a Tap was originally published on the Vanderbilt University website. 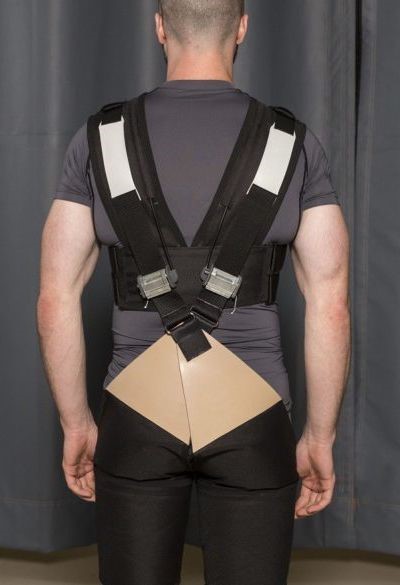 The back of Karl Zelik and Erik Lamers’ performance-boosting super-suit. (Joe Howell / Vanderbilt)