Berkeley engineers are developing a new technology that could dramatically improve the speed and accuracy of early breast cancer detection through the use of microfluidics.

Over the course of her lifetime, a woman has a one in eight chance of developing breast cancer. Medical professionals currently recommend regular mammogram screenings for women in their 40s and up. If screening detects suspect tissue, a biopsy is usually the next step.

With RPFNA, informally called the Pap smear for breast cancer, a physician injects a very fine-gauge needle into about ten random sites in the breast to draw out minute samples of tissue. As with a conventional biopsy, the cells are then isolated, stained, and tagged with antibodies in preparation for visual examination under a microscope by a pathologist.

Enter Lydia Sohn and her research group. A Berkeley professor of mechanical engineering, Sohn has devised a totally different cell inspection and surveillance technology that is highly sensitive, quick and above all, fully quantitative. The new technology, called mechano-node-pore sensing, or mechano-NPS, has the potential to eliminate the diagnostic wiggle room that comes with visual cancer diagnosis. 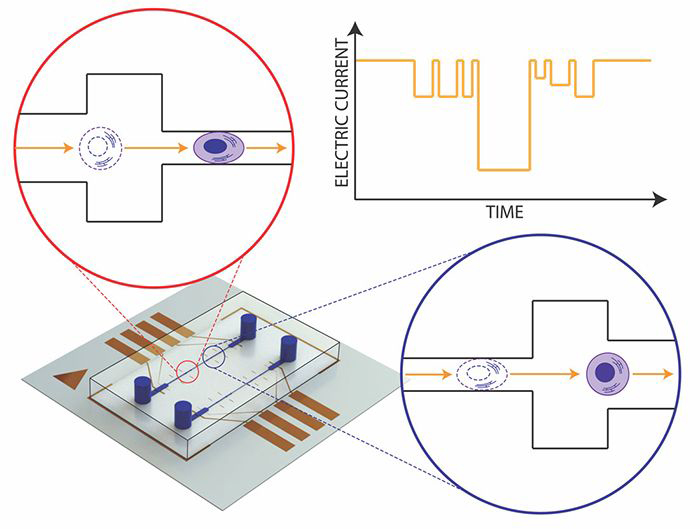 The mechano-NPS platform (lower left) includes a microfluidic channel, inlet and outlet ports for sample delivery, and electrodes that measure the current charges produced as a cell transits the channel. The schematics in the insets show how a cell must deform in order to pass through the channel. The chart in the upper right-hand corner depicts the resulting current vs. time trace as that happens. (Image by Junghyun Kim)

Mechano-NPS works by measuring the relative softness or stiffness of isolated breast cells. In 2016, Sohn and graduate student Junghyun Kim discovered that cancerous breast cells travel through the constricted channels of a micropore a little more quickly than non-malignant cells because they are more pliable, or elastic.

They have since shown that the speed with which cells make it to the finish line can be a very reliable indicator of whether they are cancerous or not.

“This was something totally new and exciting,” Sohn says. “At first I couldn’t believe that we found such a fundamental trait that distinguishes the cancer cells from normal cells.”

Sohn recently began a collaboration with Mark LaBarge, an expert on aging and breast cancer at the City of Hope hospital and research center  in Los Angeles. When Sohn showed LaBarge her lab’s data, he suggested that mechano-NPS might be able to distinguish between myoepithelial (MEP) and luminal epithelial (LEP) cells, two key subpopulations of breast cells that are central to breast cancer’s progression.

MEP cells generally play active roles in ductal contraction and in tumor suppression, while LEP cells produce milk and are known to be the cell type that cancer targets. Sohn’s lab confirmed that the new technology could distinguish between MEP and LEP cells.

Using the micropore system, Sohn found that even non-cancerous LEP cells are “softer” and more deformable than MEP cells, allowing them to pass through the narrow micropore more easily than MEP cells. This finding, she says, demonstrates the new technique’s “exquisite accuracy” compared with conventional techniques.

More importantly, she showed its sensitivity to track cells’ transformations from benign to malignant, making it an ideal method for screening RPFNA samples, Sohn says.

Sohn is working with LaBarge and his colleagues to refine the mechano-pore-node sensing capability for early breast cancer diagnosis or monitoring with RPFNA.

She and her collaborators recently described these findings in a paper published in the journal Microsystems and Nanoengineering.

“We’re eager to refine our technique to screen RPFNA samples 100 percent quantitatively and eliminate the small, but real level of uncertainty in early breast-cancer diagnoses based on imaging,” she says. “We have made some leaps and bounds. We believe that mechano-pore-sensing technology can move soon to clinical testing with patients.”

While the study used samples from RPFNA biopsies, Sohn points out that mechano-NPS technology should be applicable to samples from other biopsy procedures, and it can potentially be expanded to other types of cancers.

“This is a very real thing to me,” she adds. ”My mother had lung cancer. We are lucky — it was caught early. I hope I can help women so if they do get breast cancer at least it can be detected in its very earliest stage.

“I never want people to go through all the long and arduous tests and treatments.  That has really motivated me for the past ten years to push for fast cancer diagnosis.”

Berkeley Engineers Squeeze Cells Through Microtubes to Detect Cancer was originally published on the University of California, Berkeley website.