Everybody occasionally experiences pain. Generally, pain is manageable with over-the-counter medications, or no medication at all.

But when pain is acute and severe, such as after an injury or surgery, stronger pain medication may be required. And for chronic pain, such as from neck and back disorders, the long-term use of opioids to subdue pain can become addictive.

Most narcotics are administered orally or by injection, which means these drugs travel through the bloodstream, affecting the entire body, not only the pain site. This can cause side effects such as gastrointestinal problems, sleeplessness, low blood pressure and even liver damage. It also can lead to physical dependency.

About 39.5 million adults complain of daily pain, and at least 2 million people in the United States are addicted to prescription pain medications. In 2015, more than 33,000 people died by opioid overdose, many as illicit users who were first exposed to opioid drugs for treatment of acute or chronic pain.

There must be a better way.

Three University of Virginia researchers are working toward an innovative solution for treating lower back pain after surgery and for chronic back pain. They are developing drug delivery patches that would be worn on the skin, like a bandage, to deliver non-addictive pain medicine directly to the site of pain, rather than systemically via pills or injections. The work builds on UVA’s expertise in orthopedics and pain management – and the engineering of very thin and flexible sensors and circuits. 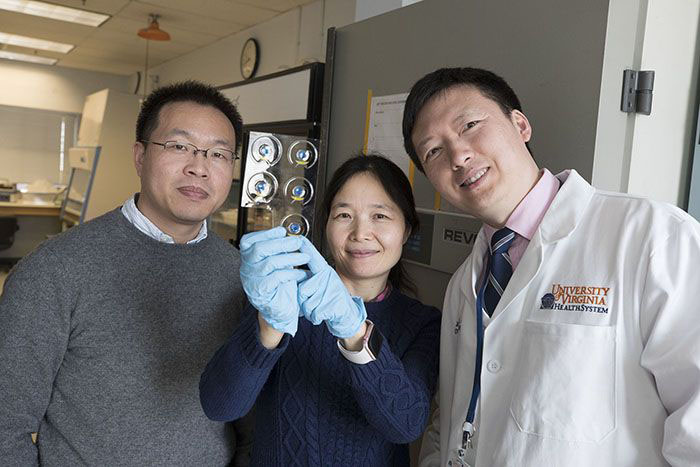 Mechanical engineer Baoxing Xu, left, Jin Li, a researcher in orthopedic surgery, and Dr. Joshua Li, an orthopedic surgeon, are developing an innovative patch that will bypass the bloodstream by delivering medication directly to the site of pain. (Photo by Dan Addison, University Communications)

“We want to relieve pain for patients while also reducing the use of potentially addictive opioids,” orthopedic surgeon Dr. Joshua Li said. “Our goal is to help patients effectively participate in managing their own pain without fear of becoming dependent on medications.”

Li is a spine surgeon who also conducts pain research. He works daily to alleviate his patients’ lower back pain before, during and after surgery, and is well aware of the opioid addiction problem in the U.S. and the need to keep patients comfortable without creating dependency.

Li is working with mechanical engineer Baoxing Xu, an expert at developing skin sensors and devices that precisely control the flow of microfluids, including medications, and with Jin Li, a researcher in orthopedic surgery. Together they are taking the concept of a commercially available product – lidocaine pain relief patches – to a new level.

Lidocaine is a non-addictive pain killer that works topically by blocking pain sensors below the skin. Current lidocaine patches simply release medication to a pain site through skin absorption. But there is no control over when or how much medicine is released, and some of it is not effectively absorbed by the skin.

The UVA researchers believe they have found a way to improve on these patches in a big way by incorporating dissolvable and minimally invasive microneedles below the surface of the patch to painlessly release controllable flows of medicine, combined with temperature sensors and micro-heaters that would create a warm, soothing effect that also alleviates pain. Relief would come within about 15 minutes.

Researchers Developing Drug Delivery Patches to Manage Pain Without Addiction Risk was originally published on the University of Virginia website.