Scientists have documented a previously unknown subpopulation of polar bears living in Southeast Greenland. The polar bears survive with limited access to sea ice by hunting from freshwater ice that pours into the ocean from Greenland’s glaciers. Because this isolated population is genetically distinct and uniquely adapted to its environment, studying it could shed light on the future of the species in a warming Arctic.

“We wanted to survey this region because we didn’t know much about the polar bears in Southeast Greenland, but we never expected to find a new subpopulation living there,” said lead author Kristin Laidre, a polar scientist at the University of Washington’s Applied Physics Laboratory. “We knew there were some bears in the area from historical records and Indigenous knowledge. We just didn’t know how special they were.” 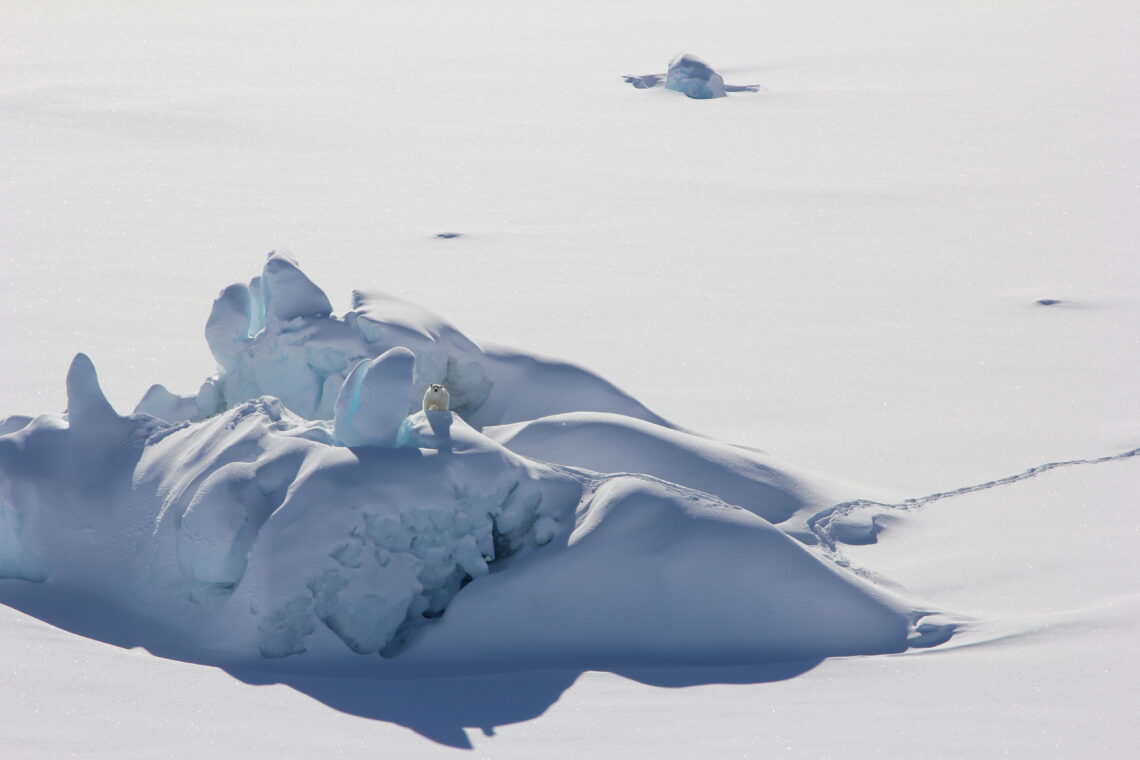 A polar bear stands on a snow-covered iceberg that is surrounded by fast ice, or sea ice connected to the shore, in Southeast Greenland in March 2016.Kristin Laidre/University of Washington

The study, published in the June 17 issue of Science, combines seven years of new data collected along the southeastern coast of Greenland with 30 years of historical data from the island’s whole east coast. The remote Southeast region had been poorly studied because of its unpredictable weather, jagged mountains and heavy snowfall. The newly collected genetic, movement and population data show how these bears use glacier ice to survive with limited access to sea ice.

“Polar bears are threatened by sea ice loss due to climate change. This new population gives us some insight into how the species might persist into the future,” said Laidre, who is also a UW associate professor of aquatic and fishery sciences. “But we need to be careful about extrapolating our findings, because the glacier ice that makes it possible for Southeast Greenland bears to survive is not available in most of the Arctic.” 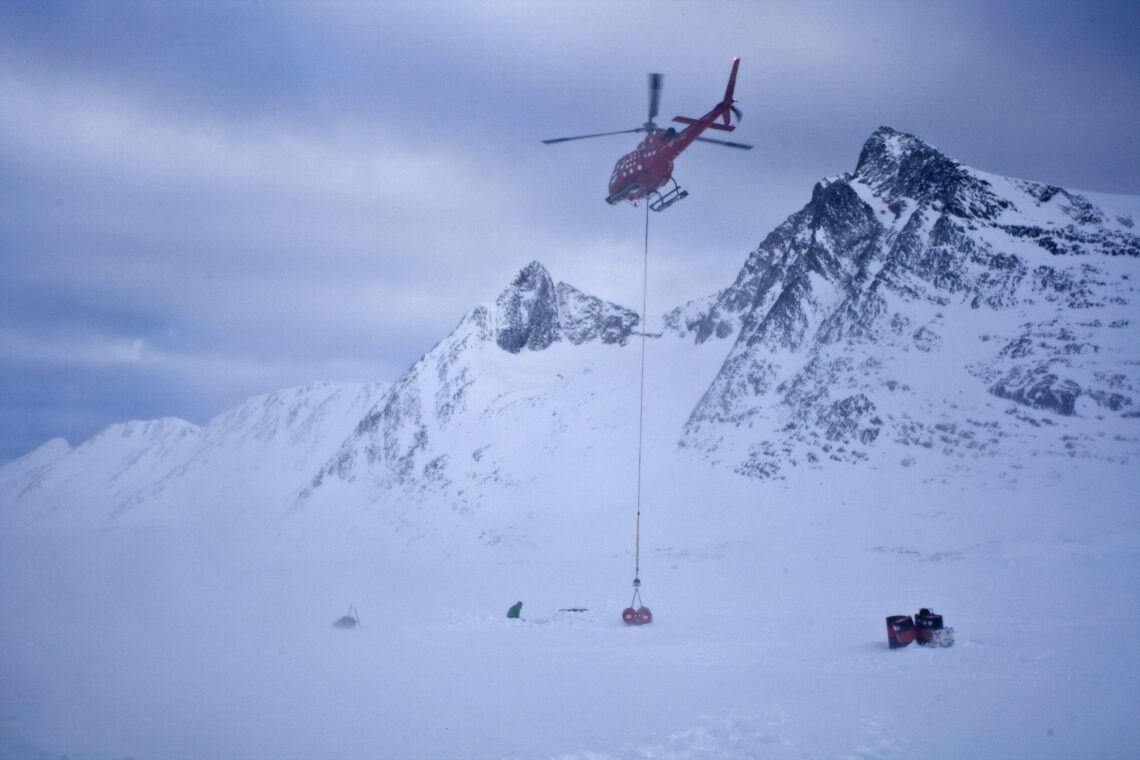 Fuel barrels were slung with a longline, shown here in March 2015, and deposited at strategic points so that the helicopter could reach polar bears in Southeast Greenland. The fieldwork required a four-hour daily helicopter commute from a Greenlandic coastal community or other bases to reach the bears’ habitat.Fernando Ugarte/Greenland Institute of Natural Resources

The genetic difference between this group of bears and its nearest genetic neighbor is greater than that observed for any of the 19 previously known polar bear populations.

“They are the most genetically isolated population of polar bears anywhere on the planet,” said co-author Beth Shapiro, a professor and geneticist at the University of California, Santa Cruz and investigator at the Howard Hughes Medical Institute. “We know that this population has been living separately from other polar bear populations for at least several hundred years, and that their population size throughout this time has remained small.” 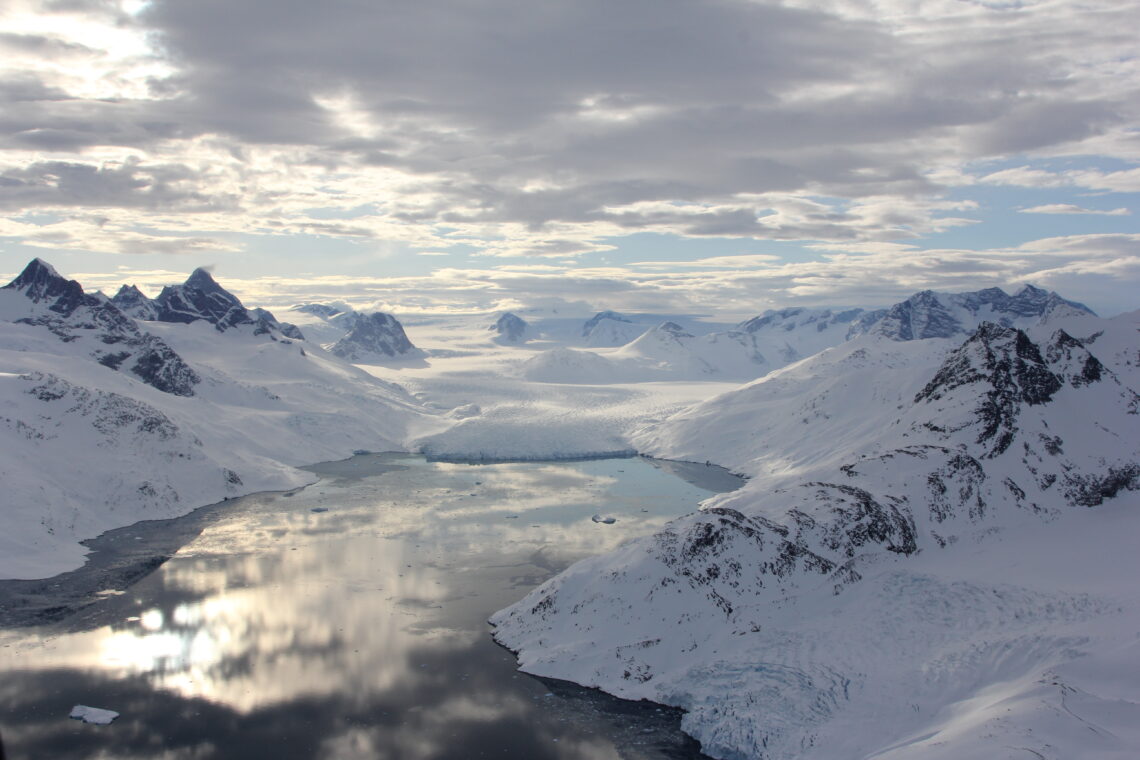 A fjord in Southeast Greenland, shown with marine-terminating glacier in the distance, filled with open water in April 2016. The Southeast Greenland coast can be ice-free for more than 250 days per year, much longer than polar bears are thought to be able to survive without hunting.Kristin Laidre/University of Washington

Part of the reason the population is so isolated, researchers believe, is that the bears are hemmed in on all sides: by the sharp mountain peaks and massive Greenland Ice Sheet to the west, the open water of the Denmark Strait to the east, and by the fast-flowing East Greenland coastal current that poses a hazard offshore.

The satellite tracking of adult females shows that, unlike most other polar bears that travel far over sea ice to hunt, Southeast Greenland bears are homebodies. They walk on ice inside protected fjords or scramble up mountains to reach neighboring fjords over the Greenland Ice Sheet. Half of the 27 tracked bears accidentally floated an average of 120 miles (190 kilometers) south on small ice floes caught in the East Greenland coastal current, but then hopped off and walked back north on land to their home fjord. 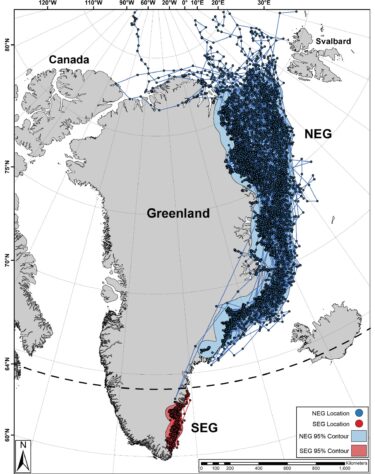 “In a sense, these bears provide a glimpse into how Greenland’s bears may fare under future climate scenarios,” Laidre said. “The sea ice conditions in Southeast Greenland today resemble what’s predicted for Northeast Greenland by late this century.”

Southeast Greenland bears have access to sea ice for only four months, between February and late May. Sea ice provides the platform that most of the Arctic’s roughly 26,000 polar bears use to hunt seals. But polar bears can’t fast for eight months. For two-thirds of the year, the Southeast Greenland polar bears rely on a different strategy: They hunt seals from chunks of freshwater ice breaking off the Greenland Ice Sheet.

“The marine-terminating glaciers in Southeast Greenland are a fairly unique environment,” said co-author Twila Moon, deputy lead scientist at the National Snow and Ice Data Center. “These types of glaciers do exist in other places in the Arctic, but the combination of the fjord shapes, the high production of glacier ice and the very big reservoir of ice that is available from the Greenland Ice Sheet is what currently provides a steady supply of glacier ice.” 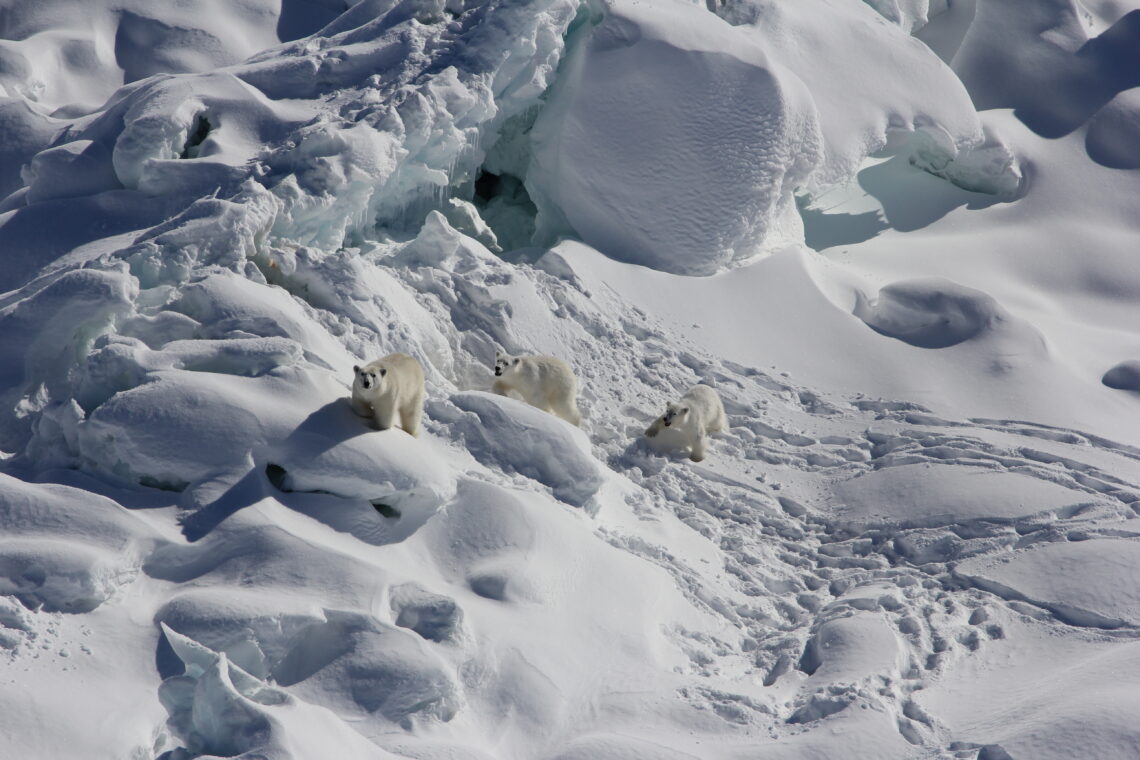 The fact that bears can survive here suggests that marine-terminating glaciers, and especially those regularly calving ice into the ocean, could become small-scale climate refugia — places where some polar bears could survive as sea ice on the ocean’s surface declines. Similar habitats exist at marine-terminating glaciers on other parts of Greenland’s coast and the island of Svalbard, a Norwegian territory located east of Greenland.

“Even with rapid changes happening on the ice sheet, this area in Greenland has the potential to continue to produce glacial ice, with a coast that may looks similar to today, for a long time,” Moon said.

The authors estimate that there are roughly a few hundred bears in Southeast Greenland, similar to other small populations. Body measurements suggest that adult females are smaller than in most regions. They also have fewer cubs, which may reflect the challenge of finding mates in the complex landscape of fjords and mountains. Laidre cautioned, however, that longer-term monitoring is needed to know the future viability of Southeast Greenland bears and to understand what happens to polar bear subpopulations as they become increasingly cut off from the rest of the Arctic by declining sea ice.

“If you’re concerned about preserving the species, then yes, our findings are hopeful — I think they show us how some polar bears might persist under climate change,” Laidre said. “But I don’t think glacier habitat is going to support huge numbers of polar bears. There’s just not enough of it. We still expect to see large declines in polar bears across the Arctic under climate change.”

The government of Greenland will decide on any protection and management measures. The International Union for Conservation of Nature, which helps oversee protected species, is responsible for determining whether Southeast Greenland bears are internationally recognized as a separate population, the 20th in the world.

“Preserving the genetic diversity of polar bears is crucial going forward under climate change,” Laidre said. “Officially recognizing these bears as a separate population will be important for conservation and management.” 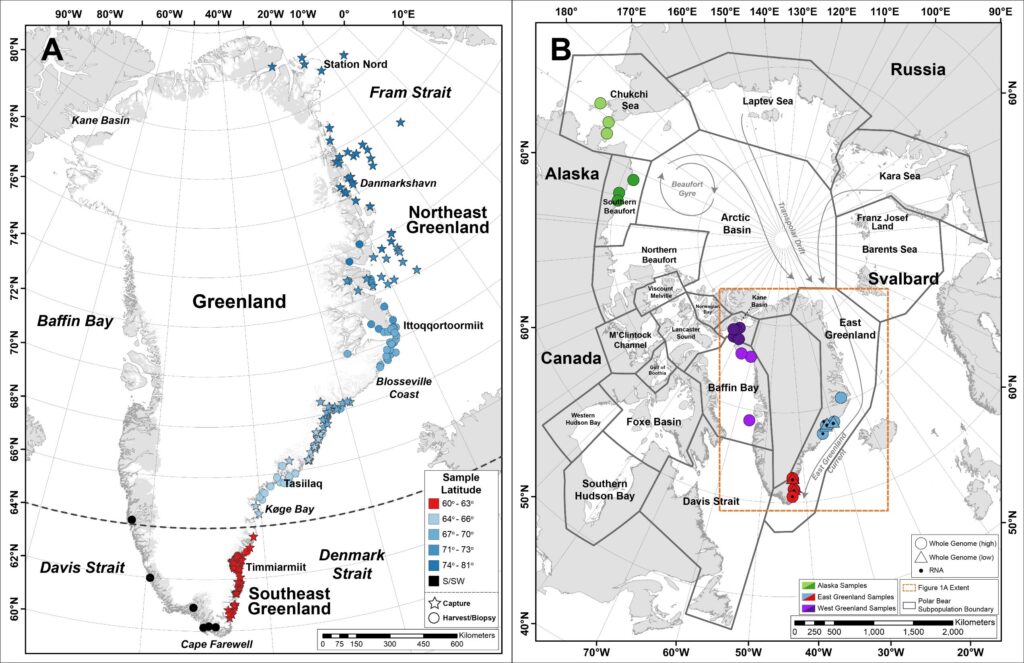 he dots on the left map show the locations where samples from Greenland polar bears were collected. The new Southeast Greenland population, shown as red dots, is located between 60 and 64 degrees north. The map at the right shows the 19 current polar bear subpopulations, with colored dots showing the location of other samples used in the analysis.Laidre et al./Science

This research was funded by NASA, the U.S. National Science Foundation, the government of Denmark; the government of Greenland; the UW; the University of Oslo; the Leo Model Foundation and the Vetlesen Foundation. Other co-authors are Eric Regehr, Benjamin Cohen and Harry Stern at the UW; Megan Supple, Christopher Vollmers and Russ Corbett-Detig at UC Santa Cruz; Erik Born, Fernando Ugarte, Peter Hegelund and Carl Isaksen at the Greenland Institute of Natural Resources; Oystein Wiig at the University of Oslo; Jon Aars at the Norwegian Polar Institute; Rune Dietz and Christian Sonne at Arhus University in Denmark; Geir Akse, a helicopter pilot in Norway; and David Paetkau at Wildlife Genetics International in Canada.

This story was originally published by University of Washington on June 16, 2022