Manganese is known for making stainless steel and aluminum soda cans. Now, researchers say the metal could advance one of the most promising sources of renewable energy: hydrogen fuel cells.

In a study published today (Oct. 29, 2018) in the journal Nature Catalysis, a University at Buffalo-led research team reports on catalysts made from the widely available and inexpensive metal.

The advancement could eventually help solve hydrogen fuel cells’ most frustrating problem: namely, they’re not affordable because most catalysts are made with platinum, which is both rare and expensive.

“We haven’t been able to advance a large-scale hydrogen economy because of this issue involving catalysts. But manganese is one of the most common elements in Earth’s crust and it’s widely distributed across the planet. It could finally address this problem,” says lead author Gang Wu, PhD, associate professor of chemical and biological engineering in UB’s School of Engineering and Applied Sciences.

For more than a decade, Wu has been searching for alternative catalysts for hydrogen fuel cells. He has reported advancements in iron- and cobalt-based catalysts; however, each wears down over time, limiting their usefulness, he says.

In previous work, Wu discovered that adding nitrogen to manganese causes internal changes to the metal that makes it a more stable element. In experiments reported in the study, he devised a relatively simple two-step method of adding carbon and a form of nitrogen called tetranitrogen to manganese.

The result was a catalyst that’s comparable in its ability to split water — the reaction needed to produce hydrogen — as platinum and other metal-based alternatives. More importantly, the stability of the catalyst makes it potentially suitable for hydrogen fuel cells. This could lead to the wide-scale adoption of the technology in buses, cars and other modes of transportation, as well as backup generators and other sources of power.

Wu plans to continue the research, focusing on improving the catalyst’s carbon microstructure and the method in which nitrogen is added. The goal, he says, is to further enhance the catalyst’s performance in practical hydrogen fuel cells.

The research was supported by the UB RENEW Institute, the U.S. National Science Foundation and the U.S. Department of Energy. 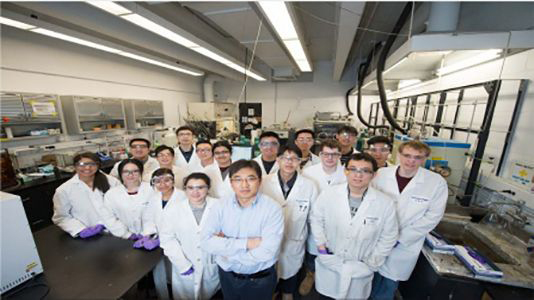 Gang Wu, PhD, associate professor of chemical and biological engineering in the School of Engineering and Applied Sciences, front and center with arms crossed, in his lab with his students. Credit: Onion Studio.