It’s hard to beat hydropower from dams, a renewable source of electricity that helped build much of the developed world. Yet five scientists from Michigan State University say that behind roaring cascades is a legacy of underestimated costs and overestimated value.

The developing world can – and must – find better ways to generate hydropower for industries and the public. The case is outlined in “Sustainable hydropower in the 21st century” in this week’s Proceedings of the National Academy of Sciences.

“For hydropower to continue making a contribution to sustainable energy, it needs to consider from the outset the true costs – social, environmental and cultural – that may be involved,” said Emilio Moran, John A. Hannah Distinguished Professor of Geography, Environment and Spatial Sciences. “We also must consider costs in the pricing of the infrastructure, including the eventual removal of the dam, rather than pass those on to the public in 30 years."

The energy benefits of dams no longer outweigh the social and environmental costs that damming up rivers brings, Moran explained.

As it turns out, dams have a dark side. They disrupt the natural ecology of rivers, damage forests and biodiversity, release large amounts of greenhouse gases, as well as displace thousands of people while disrupting food systems, water quality and agriculture. To top it off, the power generated often doesn’t go to the places bearing the ecological burdens.

The MSU team of geographers, social scientists, hydrologists and engineers examined how to address the needs of a changing world without damming more rivers – while still considering the estimated 3,700 dams either planned or under construction primarily in developing countries.

The danger: a large-scale destruction of the natural world, one likely exacerbated by looming climate change.

“The human costs of large dams are no less important,” the paper notes. “The social, behavioral, cultural, economic and political disruption that populations near dams face are routinely underestimated.”

Moreover, dams typically have a finite lifespan – usually around 30 years – making them fall short as a long-term sustainable strategy.

The MSU group acknowledged that rivers can still be a valuable source of power – but that a less intrusive technology must be developed to unleash it. Innovative technologies that don’t require damming a river or resettling populations stand to transform the hydropower sector and the technologies, they said, would need to be accompanied by both environmental and social impact assessments with teeth – meaning damning assessments could stop a dam.

One option is instream turbine technology , a less intrusive way to tap into hydropower without the major disruptions of dams. 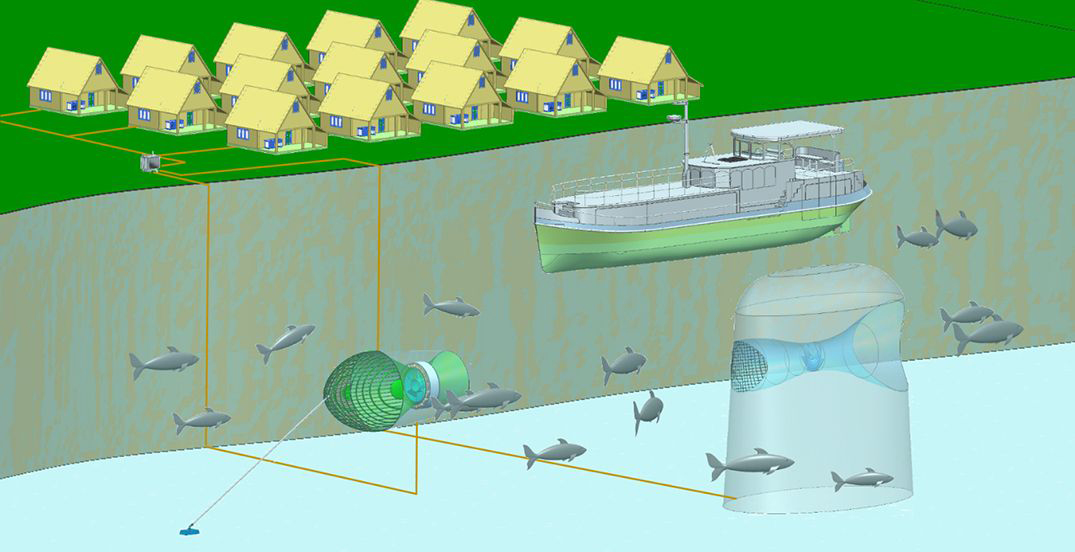 The turbine in river transmitting power to a local community without the disruptions of traditional dams. (prepared by Raul Quispe-Abad and Norbert Müller)

“Our team is working on alternatives to hydropower generation, such as in-stream turbines that do not involve damming up the river, but produce energy for local communities, maintain a healthy river ecology, and does not involve resettlement and other social costs," Moran said. “Our goal is no less than transforming the hydropower sector."

The paper was written by Moran and Maria Claudia Lopez of community sustainability, Nathan Moore of geography, Norbert Mu¨ller of turbomachinery, and David Hyndman of hydrology. Moran also is a member of MSU’s Center for Systems Integration and Sustainability.

The article is part of the special series Inaugural Articles by members of the National Academy of Sciences, in this case, Moran, elected in 2010.

The work was supported by the National Science Foundation and Brazil’s Fundacao de Amparo a Pesquisa do Estado de Sao Paulo.