The major fusion energy breakthrough of achieving ignition is cause for celebration at Rochester’s Laboratory for Laser Energetics.

Researchers at Lawrence Livermore National Laboratory’s (LLNL) National Ignition Facility (NIF) this week announced they achieved a major milestone in the field of fusion energy. According to a release from the United States Department of Energy (DOE), scientists at LLNL have, for the first time, achieved ignition—defined in 1995 by the National Academy of Sciences as a fusion reaction that creates a net gain of energy from the target.

Fusion is the process that powers stars, including the sun. It occurs when two or more atoms of light elements, such as hydrogen, combine to form a heavier atom. Since the nucleus of each atom is positively charged, there is a natural force that repels the atoms and keeps them from getting close enough to “fuse.” To overcome the forces that naturally want to repel the atoms, scientists must create the extreme temperatures and pressures that exist in stars. They do this with lasers. These extreme conditions push the atoms’ nuclei together, releasing energy.

Fusion does not emit carbon or other greenhouse gases, nor does it produce nuclear waste; it is therefore a cleaner and safer energy solution than coal, natural gas, or nuclear power.

Because deuterium, an isotope of hydrogen and one of the fuels used in the fusion process, is abundant in nature, fusion is a potential long-term, sustainable energy source.

The announcement validates the laser-driven implosion techniques on which LLNL and a large community of researchers, including scientists at the University of Rochester’s Laboratory for Laser Energetics (LLE), have closely collaborated for decades, as a way to support the viability of the nation’s nuclear weapons stockpile and pave the way for fusion as an abundant supply of clean energy.

As LLNL’s principal partner and the largest DOE university-based program in the nation, LLE educates and trains scientists who are able to perform experiments at LLE before they scale the experiments on the NIF. Several of the researchers on the project conducted PhD research or trained at LLE’s Omega Laser Facility, and researchers at LLE developed diagnostics included in the laser shot that resulted in ignition. In addition, LLE scientists were involved in the review of the initial results.

Says University President Sarah Mangelsdorf: “On behalf of the University of Rochester, I want to express my excitement for the breakthrough in nuclear fusion science at the Lawrence Livermore National Laboratory and extend my congratulations to its National Ignition Facility scientists, who are collaborators in the pursuit of fusion as the cleanest and most abundant energy of our future. Our own Laboratory for Laser Energetics—the largest university-based US Department of Energy program in the nation and home to the OMEGA laser—has become a word-class destination for this inertial-confinement fusion and high-energy-density physics research. I want to say how proud I am of our own scientists, staff, students, and alumni for their many contributions and efforts that helped us reach this historic scientific achievement. We look forward to building on our partnership with Lawrence Livermore National Laboratory and the momentum of this seminal accomplishment. I would like to additionally thank all of our elected state and federal officials who provide unwavering support to this critical mission to extract the potential of fusion to both support national security and as our world’s next clean and safe energy source.”

Says Hochul: “New York is a hub for innovation and, across the state, our institutions are working on cutting-edge research and advancing science to benefit all sectors. The scientists at the University of Rochester’s Laboratory for Laser Energetics are no exception, and we congratulate the team on this breakthrough. This milestone will advance our understanding of clean power and help us combat the climate crisis, a key priority for the state.”

Says Schumer: “The University of Rochester’s Lab for Laser Energetics, fueled by its more than 400 Rochester workers, is a key partner in our nation’s Inertial Confinement Fusion (ICF) program that today produced this breakthrough at Lawrence Livermore National Labs and is a powerhouse in our nation’s long-sought pursuit to create a new unlimited source of clean energy from fusion. This astonishing scientific advance puts us on the precipice of a future no longer reliant on fossil fuels but instead powered by new clean fusion energy, which is why I fought and ultimately succeeded four years ago in reversing a plan that would have then closed the Rochester Laser Lab for good. Instead, I secured record funding to expand their work because making this future clean-energy world a reality will require our physicists, innovative workers, and brightest minds at our DOE-funded institutions, including the Rochester Laser Lab, to double down on their cutting-edge work. That’s why I’m also proud to announce today that I’ve helped to secure the highest ever authorization of over $624 million this year in the National Defense Authorization Act (NDAA) for the ICF program to build on this amazing breakthrough.”

Says Gillibrand: “The results of this research are a clear advancement in reducing America’s dependence on foreign energy and an exciting development to get cleaner air and water for our children and grandkids. Funding groundbreaking research such as the work done by the Inertial Confinement Fusion program is imperative as we continue to find ways to combat the climate crisis while ensuring our energy security.”

Says Morelle: “This scientific breakthrough is a significant step forward in our understanding of nuclear fusion and its limitless potential. I am proud of the incredible work completed at Lawrence Livermore National Laboratory’s National Ignition Facility as well as the supporting research done at the University of Rochester’s Laboratory for Laser Energetics. I congratulate the many scientists and engineers who contributed to this exciting achievement. These men and women have played a critical role in achieving this milestone and continue to facilitate groundbreaking research and discoveries every year. I look forward to continuing to support these exceptional scientific efforts for years to come.”

LLE Director Chris Deeney congratulated LLNL and the NNSA on the achievement of ignition and said the breakthrough is a triumph for the entire physics community.

“In the 1990s, NNSA/DOE had the foresight to invest both in a major science facility, the NIF, and a broad-based community, to tackle a grand challenge—bring fusion into the laboratory,” Deeney says. “This investment in the future just paid off—a result of decades of painstaking research and attention to detail. Now, we can see a future with a laboratory capability to both support the US nuclear deterrent and to start addressing the future for clean energy.”

He added, “A big congratulations also goes to Mike Campbell, former LLE director, as he was a pioneering scientist and leader at LLNL, when NIF was starting, and to General Atomics for their work on targets to advance ICF.” 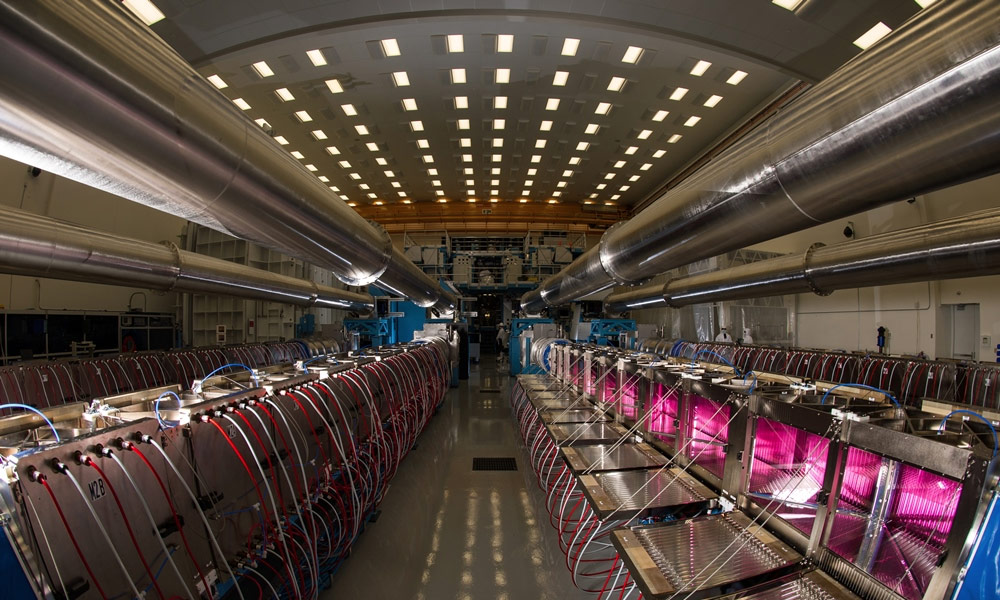 Fusion has long been viewed as an ideal energy source due to its potential to be a safe, clean, cheap, and reliable energy technology. Fusion energy replicates the same reaction that powers the stars, including the sun, and is produced by combining atoms to create heavier ones.

Since the early 1970s, scientists have pursued the possibility of using high-power lasers to compress thermonuclear material long enough, at high enough temperatures to trigger ignition, meaning the resultant output of fusion energy is greater than the energy delivered to the target. The entire process of compression and ignition, which occurs in nanoseconds, is called inertial confinement fusion (ICF).

Ignition at LLNL was achieved by focusing 192 gigantic lasers onto a target the size of a BB. The researchers employed “indirect drive,” meaning high-energy lasers were directed at and into a small box, or holhraum, made of gold, with a fuel capsule of deuterium and tritium inside. The laser beams heat the gold, causing it to emanate X-rays, which drive the implosion of the fuel.

But the underlying principles are similar enough that experiments at Rochester can help inform the research at LLNL, and vice versa.

“The direct-drive fusion developed at LLE could be a more efficient approach to both support the US nuclear deterrent and to start addressing the future for clean energy,” Deeney says. “Along with the scientific community, we will continue to advance the laser technologies and target science, to provide new options to NNSA.”

While ignition is a major achievement in ICF research, hurdles remain in the quest to use fusion as a widespread, commercial source of clean energy.

“This achievement will immediately impact NNSA’s mission,” Deeney says. “Ignition is an important gateway to the future of energy, but more research and technology development will be needed to realize this future.”

Other state and local leaders who have championed the LLE and the Inertial Confinement Fusion program agree that this milestone is an important stride in recognizing fusion as a sustainable energy source.

Says New York State Senator Jeremy Cooney: “It is thrilling to see the University of Rochester continuing our community’s legacy of innovation and ingenuity. UR’s Laboratory for Laser Energetics played a critical role in the historic achievement of ‘ignition’ announced by Secretary Granholm today, and for that I am incredibly proud. We are truly fortunate to have an institution right here in Rochester whose work not only leads the nation but the globe. Congratulations to the scientists who helped spearhead this effort. I look forward to your future successes and breakthroughs.”

Says New York Assemblywoman Sarah Clark: “As a longtime supporter of the Laboratory for Laser Energetics at the University of Rochester, I am thrilled to hear the news that the National Ignition Facility achieved ‘ignition’ this week. The Omega Laser Facility here at the LLE is one of only three worldwide in the Department of Energy’s NNSA Inertial Confinement Fusion Program and is one of many reasons our region is on the map for technology innovation and energy research. Today’s historic announcement puts us one step closer to changing how the world uses energy. Thank you to Chris Deeney, President Mangelsdorf, LLE employees, and all of our partners for your leadership and continued support for the LLE, and towards achieving a sustainable future for generations to come.”

This story was originally published by the University of Rochester on December 13, 2022.