A quick eye exam might one day allow eye doctors to check up on both your eyeglasses prescription and your brain health.

A study of more than 200 people at the Duke Eye Center published March 11 in the journal Ophthalmology Retina suggests the loss of blood vessels in the retina could signal Alzheimer’s disease.

In people with healthy brains, microscopic blood vessels form a dense web at the back of the eye inside the retina, as seen in 133 participants in a control group.

In the eyes of 39 people with Alzheimer’s disease, that web was less dense and even sparse in places. The differences in density were statistically significant after researchers controlled for factors including age, sex, and level of education, said Duke ophthalmologist and retinal surgeon Sharon Fekrat, M.D., the study’s senior author.

“We’re measuring blood vessels that can’t be seen during a regular eye exam and we’re doing that with relatively new noninvasive technology that takes high-resolution images of very small blood vessels within the retina in just a few minutes,” she said. “It’s possible that these changes in blood vessel density in the retina could mirror what’s going on in the tiny blood vessels in the brain, perhaps before we are able to detect any changes in cognition.” 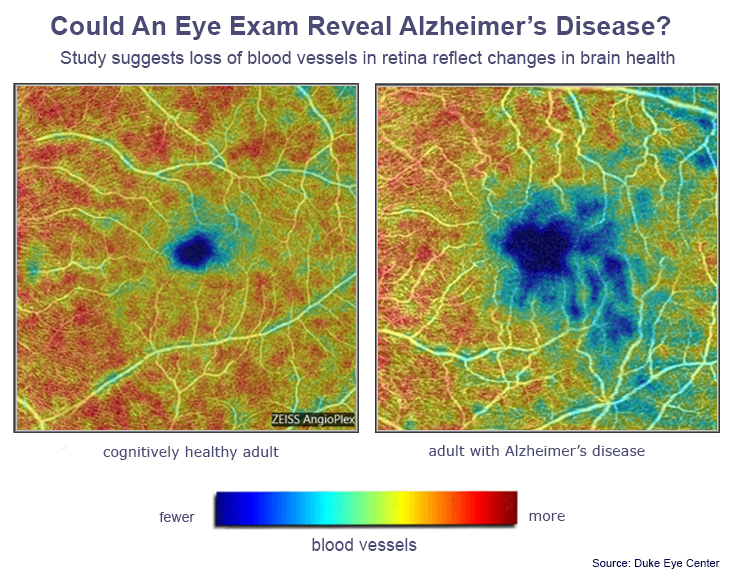 With nearly 6 million Americans living with Alzheimer’s disease and no viable treatments or noninvasive tools for early diagnosis, its burden on families and the economy is heavy. Scientists at Duke Eye Center and beyond have studied other changes in the retina that could signal trouble upstream in the brain, such as thinning of some of the retinal nerve layers.

“We know that there are changes that occur in the brain in the small blood vessels in people with Alzheimer’s disease, and because the retina is an extension of the brain, we wanted to investigate whether these changes could be detected in the retina using a new technology that is less invasive and easy to obtain,” said Dilraj S. Grewal, M.D., a Duke ophthalmologist and retinal surgeon and a lead author on the study. The Duke study used a noninvasive technology called optical coherence tomography angiography (OCTA). OCTA machines use light waves that reveal blood flow in every layer of the retina.

An OCTA scan could even reveal changes in tiny capillaries -- most less than half the width of a human hair -- before blood vessel changes show up on a brain scan such as an MRI or cerebral angiogram, which highlight only larger blood vessels. Such techniques to study the brain are invasive and costly.

“Ultimately, the goal would be to use this technology to detect Alzheimer’s early, before symptoms of memory loss are evident, and be able to monitor these changes over time in participants of clinical trials studying new Alzheimer’s treatments,” Fekrat said.

This story was originally posted by Duke University.