The following is a statement from the Association of American Universities announcing that Indiana University President Michael A. McRobbie will serve as acting chair of the AAU Board of Directors:

The Association of American Universities Board of Directors today elevated Indiana University President Michael A. McRobbie to acting board chair. In its October annual meeting in Washington, D.C., AAU’s full membership will vote on confirming President McRobbie’s nomination as the board’s official chair. He is succeeding Vanderbilt University Chancellor Nicholas S. Zeppos, who recently announced his retirement and served as AAU chair since October 23, 2018.

“Now more than ever, America’s leading research universities must continue to pursue the kind of inquiry, scholarship, and student engagement that have made them the envy of the world,” McRobbie said. “I am excited about using this position to support forward-thinking innovations in higher education.”

As chair, McRobbie will help guide AAU’s work and serve as a spokesperson for the association, particularly on federal policy issues affecting research universities. He will also represent AAU in discussions with U.S. lawmakers, help develop national policy positions, and play a significant role in determining the association’s agenda during the coming year.

“President McRobbie’s unparalleled expertise at the intersection of science, the humanities, and the day-to-day realities of leading a large, diverse university will make him a highly effective chair for AAU,” said AAU President Mary Sue Coleman. “He has a keen understanding of how leading research universities play a key role in educating the next generation of leaders and scholars while transforming the economies of the world, the nation, and the cities and towns they serve.”

Founded in 1900, the Association of American Universities comprises 62 distinguished institutions that continually advance society through education, research, and discovery.

Our universities earn the majority of competitively awarded federal funding for academic research, are improving human life and wellbeing through research, and are educating tomorrow’s visionary leaders and global citizens. 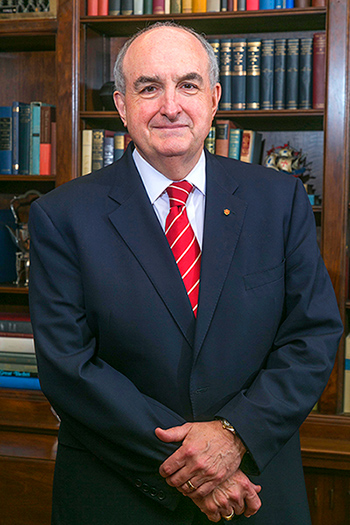