A critical component of addressing sexual assault and misconduct on campus involves surveying students. (As will be discussed in a later section, surveys are part of a campus “ecosystem” centered on addressing sexual assault and misconduct. Part of the power of survey results comes from combining these results with other sources of information.) Surveys provide information on the prevalence of different types of assault and misconduct. They reveal students’ knowledge about and attitudes toward campus policies and resources. And they may shed light on a wealth of other topics, including the timing and location of different types of assault, attitudes toward reporting, and bystander intervention behaviors.

Surveys also reveal variation among the overall student population (e.g., between undergraduate and graduate students; between male, female, and LGBTQ students) that can help guide institutional efforts. And comparing survey results over time can help track trends in the prevalence of sexual assault and misconduct as well as in behaviors and attitudes, and knowledge and use of campus resources.

100% of responding institutions have surveyed students on issues around sexual assault and misconduct at least once since 2013.

Institutions differ in their approach to surveying students, reflecting the fact that one size does not fit all. 25 of the 26 AAU campuses who participated in the 2015 AAU Climate Survey on Sexual Assault and Sexual Misconduct also responded to the Campus Activities Survey. Nine of those institutions utilized the AAU Campus Climate Survey alone, while 16 of them utilized both the AAU survey and another survey. Thirty institutions responding to this survey utilized a climate survey other than AAU’s (Surveys–Figure 1).

These other climate surveys comprised a variety of different efforts. Many campuses have developed their own prevalence surveys or have incorporated questions about these issues into student experience surveys. For example, Massachusetts Institute of Technology (MIT) developed the Community Attitudes on Sexual Assault (CASA) Survey, which was administered to all enrolled MIT students. MIT’s survey and findings were covered extensively in the media.

Rutgers University–New Brunswick piloted a climate survey developed by the Department of Justice’s Office on Violence Against Women as part of a comprehensive campus climate assessment called #iSPEAK. And Indiana University’s Community Attitudes and Experiences with Sexual Assault Survey asked students about their attitudes, perceptions, and direct experiences with sexual assault, as well as their opinions on the university resources and practices related to preventing and responding to instances of sexual misconduct.

Some institutions that are part of university systems are participating in system-wide surveys on campus sexual assault and misconduct. For example, the University at Buffalo-State University of New York participated in piloting the SUNY Campus Climate Survey, which asks about students’ experiences with and knowledge of reporting, and the university’s processes. A separate survey measures faculty and staff knowledge of the university’s processes for reporting, support and response to sexual assault disclosures. Stony Brook University will participate in this survey in spring of 2017.12 Georgia Institute of Technology will soon participate in a University System of Georgia survey on sexual assault and misconduct.

Some institutions participated in multi-institutional efforts separate from the AAU survey. For example, the American College Health Association National College Health Assessment (ACHA-NCHA) is a national survey that includes questions about student experiences of sexual assault, dating violence, and stalking in the past 12 months; it also collects other data about student health behaviors and experiences. More than 100 institutions nationwide participate in this survey, including at least 10 respondents to the Campus Activities Survey. Many of these institutions utilize ACHA-NCHA in addition to other surveys on sexual assault.

Another example is the Administrator-Research Campus Climate Consortium (ARC3) survey. ARC3 is a consortium of sexual assault researchers and student affairs professionals who came together to respond to the White House Task Force on Keeping Students Safe on Campus, particularly the need to develop a campus climate survey informed by all who would use it. Four responding institutions mentioned administering the ARC3 survey.

Surveys–Figure 2 shows that a significant number of institutions are relying on multiple surveys. Thirty-one of the 55 responding institutions (56%) indicated participation in both local surveys and multi-institutional efforts.

Survey frequency requires additional discussion: There is no consensus about the optimal frequency for surveys, and more frequent surveys, especially of prevalence, are not always best. Students who are frequently surveyed develop “survey fatigue” and are less likely to respond; lower response rates reduce the utility of the findings. Surveying too often may also leave institutions without enough time to measure the effects of changes or enhancements in policies and programs. Survey administration and analysis is expensive in time and money, and too much surveying may take resources away from other activities. Finally, especially in surveys that ask about prevalence, answering questions can be a difficult emotional experience for students. There should be a compelling reason for asking them to repeatedly revisit disturbing themes and incidents.

Institutions reported the frequency with which they currently administer and/or planned to administer different types of surveys (Surveys–Figure 4). There is a distinct difference between administration of local surveys, which are most often administered every other year, and participation in multi-institutional efforts, for which the response was more diverse. Many of the institutions that reported “some other cycle” for multi-institutional efforts mentioned a 3-year cycle. Indeed, institutions had very different plans for surveys and data collection going forward.

For each type of survey there was little difference between those that ask about prevalence and those that ask about climate (e.g., knowledge of and attitudes about campus policies and resources). Standardizing survey types and times across institutions, especially by external mandate as some states have done, may not be the best approach when factoring in variation among campuses and that surveys are only one part of prevention. It is clear there is room for thoughtful consideration about the optimal interval between survey administration.

87% (48/55) of responding institutions indicated that surveys or data from surveys stimulated new or changed existing conversations with students about sexual assault and misconduct.

Several other institutions noted analysis of survey results is currently underway, and they expect the results to affect conversations with students soon.

At Boston University, the Sexual Assault Response and Prevention Center plans to use data from the Climate Survey to train members of the University Student Conduct Board. Education and training is discussed in more detail in the next section of the report.

Survey results served as the basis for town hall meetings and summits with students, as well as for student-led discussions. For example, at Cornell University, the undergraduate student government and students involved in Greek life organized roundtable discussions to engage students with survey results. Graduate Women in Science (GWIS) students hosted a session on sexual harassment that was attended by over 50 graduate/professional students.

Survey findings led to revisions of university policies and procedures. For example, at Northwestern University, campus climate survey data led to recommendations to the administration from the Campus Coalition on Sexual Violence, student government, and Title IX Committee. At the University of Toronto, survey data fostered a two-year-long discussion with students, staff, and faculty leading to the implementation of the University’s new Policy on Sexual Violence and Sexual Harassment.

Survey findings catalyzed the development of new classes. For example, Rice University’s Survey on Unwanted Sexual Experiences sparked student interest in creating programming for incoming freshmen. The student association has asked for the creation of a mandatory class about consent, sexual and domestic violence, and stalking. The class is under development and will be given to all incoming freshmen in fall 2017.

At the University of Michigan, survey results helped spur the development of two new classes specifically related to Title IX and sexual assault and misconduct in higher education. The courses led to an increase in classroom content and discussion of these issues, as evidenced by the number of guest lectures delivered by staff from the Sexual Assault Prevention and Awareness Center and other university administrators.

Surveys led to increased collaboration between administrators and student organizations, and increased student involvement in these issues. Student governments have created their own subcommittees to work on issues of sexual assault and misconduct, and student groups have been formed to work in concert with university Title IX and sexual violence prevention and education offices.

For example, the University of Pennsylvania held discussions not just with the Trustees, Council of Deans, Faculty Senate Executive Committee, and Human Resources, but also with students and student leaders to describe the results of the survey and to ask for advice on next steps. Administrators and student leaders from across Indiana University held a student leaders summit to review, evaluate, and make recommendations based on climate survey data. 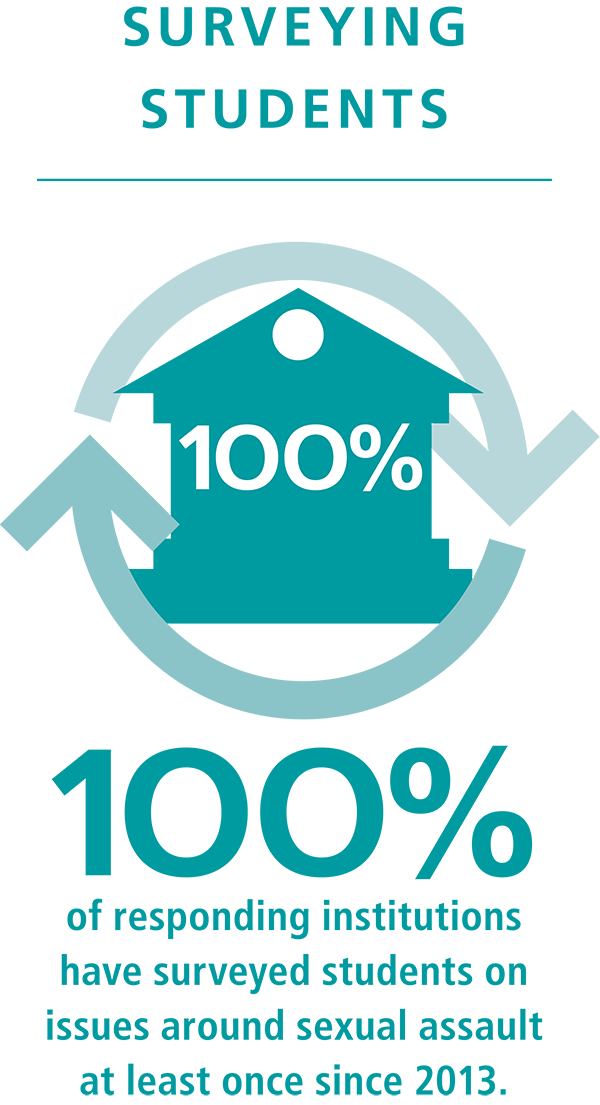