On September 15, 2018, biomedical engineering senior Sahit Menon found himself in a classroom that tested all he had learned in his previous three years at the USC Viterbi School of Engineering.

Except the classroom this time was at the gates of Moria, the infamous refugee camp on the Greek island of Lesvos, home to an estimated 9,000 asylum seekers where Menon had arrived just days before as part of a taskforce of USC students to research and find immediate engineering solutions to the global refugee crisis.

“The main thought going through my head was sheer disbelief that a human being could endure such circumstances,” said Menon.

He was joined in this disbelief by 13 other USC students – part of an initial fact-finding mission to Lesvos. Since 2015, the Greek island has been the “main gateway” to Europe for millions of asylum seekers, fleeing wars in places like Syria, Iraq and Afghanistan.

The USC Viterbi course, a first of its kind at USC, is titled “Innovation in Engineering Design for Global Challenges.” Offered in the Sonny Astani Department of Civil and Environmental Engineering, the course is taught by Associate Professor and Stephen Schrank Early Career Chair Burcin Becerik-Gerber jointly with Associate Professor of Practice in Civil and Environmental Engineering and Architecture, David Gerber, and lecturer Brad Cracchiola – a product development engineer and USC Viterbi alum (B.S. aerospace engineering ’93, M.S. mechanical engineering ’98) who led the team credited with developing the “world’s fastest racing wheelchair” at the Rio Paralympic Games in 2016.

Over the course of two semesters, students – whose majors range from mechanical, biomedical, civil and chemical engineering to computer science, business administration, communications and screenwriting – break into five interdisciplinary groups to work on a specific project, product or service that addresses the needs of refugees and local communities caught up in the crisis. Ideas include improved sanitation, shelters, innovations to address the mental health and wellbeing of children in camps, local empowerment, education, access to information and security.

The course is funded in part by Provost Michael Quick’s Wicked Problems Practicum, the Min Family Engineering Social Entrepreneurship Challenge and the office of USC Viterbi’s Dean Yannis C. Yortsos. In addition to research, the students spent time volunteering inside the camps, assisting with food distribution, repairing damaged ISO containers inside the Safe Zone – an area of Moria that houses unaccompanied minors – and painting murals on the walls of the camp and outside the containers.

“USC students gave the minors an opportunity to be children again,” said Vassia Danaskou, a developmental psychologist with International Organization for Migration, IOM, which runs the Safe Zone in Moria. “Their presence in the Safe Zone and their activities motivated the children to participate, to exchange views, to feel playful. They were so excited that students came from so far away to be with them and to improve even the little things in their lives.”

According to camp management, this was the first time a university group was granted access to Moria. Typically, only registered NGOs and their volunteers have access to the hotspots, officially called “Reception and Identification Centers,” managed by the Greek Ministry of Interior.

The United Nations High Commissioner for Refugees, UNHCR, reported in 2018 that an unprecedented 68.5 million people around the world have been forced from home. Among them are 25.4 million refugees, over half of whom are under the age of 18. In addition to persecution and war, climate change and economic instability have added fuel to the ongoing mass migration of people from the developing world.

The group of 14 USC students, led by Becerik-Gerber and course coordinator Daniel Druhora, arrived in Lesvos on a mission to build relationships with local stakeholders, survey the camps and conduct user-research and problem discovery – initial steps that would form the basis for the student-led engineering and innovation projects.

“You can’t innovate in a bubble,” said Becerik-Gerber. “It is of paramount importance to expose students firsthand to the realities of the crisis and to help them make the connections to local stakeholders, international aid organizations operating in these hotspots, regional and local governments, private enterprise and refugees themselves. We need all of these actors to tackle the problems as a whole.”

“The refugee issue must be addressed by an interdisciplinary team of individuals,” said Bernard Amadei (NAE), founder of Engineers Without Borders, and distinguished professor of civil engineering at the University of Colorado at Boulder who accompanied the USC team to Lesvos as a consultant.

“Engineers have a professional and moral obligation to contribute to the building of a more sustainable, stable, and equitable world by addressing issues such as those faced by refugees around the world,” he said.

Over 45 percent of the 770,838 refugees and migrants who arrived in Europe in 2015 at the height of the crisis have landed in Lesvos, a small island on the Aegean located only 6.2 miles from Turkey with a population of 86,000. But since the 2016 E.U. – Turkey Agreement, which effectively bottlenecked the flow of boats, the Greek government confined refugees and migrants to five islands for the duration of their asylum process. Lesvos is one of them,  with continued strain on its resources as an estimated 90 people still arrive on the island daily.

“If you are here to help, I say welcome to the family,” said Stavros Mirogiannis, camp manager at Kara Tepe, a second, smaller refugee camp on Lesvos that houses families with children and people with vulnerable cases. “We need your ideas, your ways of thinking about the problems we face.” 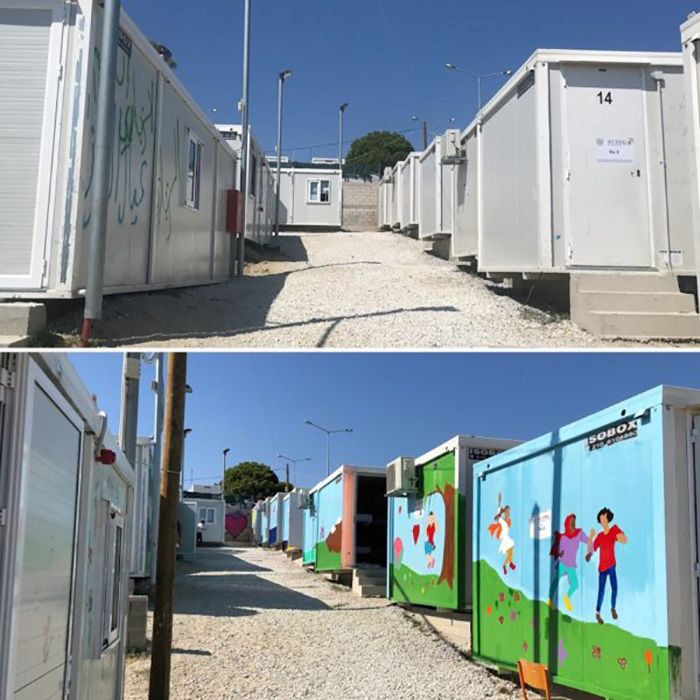 Before and after pictures of the housing containers painted by USC students in Moria’s safe zone for unaccompanied minors. Photo / Daniel Druhora

“The September fact-finding mission is of immense importance to the USC students in determining the type of entrepreneurial projects they plan to pursue,” Cracchiola said. “The students need to ask the right questions first before they begin, if they want the products to matter or succeed.”

The students also had the opportunity to meet and work alongside their refugee global partners. Maryam Payenda, a database engineer who worked for Afghanistan’s Ministry of Interior before she was forced to flee her home, traveled by ferry from the nearby island of Chios to meet her USC teammates in Lesvos.

“I am first a human being, then a refugee.” Payenda said. “I feel compelled to help fellow refugees, and knowing that I can connect with USC students to solve refugees’ real problems is a great opportunity for me to show the world, together, that refugees are part of humanity and that we shouldn’t leave them behind.”

In addition to the activities in the camps, the group conducted meetings with several key stakeholders, including: Spyros Galinos, the mayor of Lesvos, and his advisory team; the Lesvos Chamber of Commerce, Chamber of Civil Engineers and the Lesvos Local Development Company, ETAL S.A., responsible for over 100 million euro in local development projects on the island in the last 15 years; Astrid Castelein, head of the UN refugee agency (UNHCR) office on Lesvos and her senior staff; representatives from the Northern Aegean regional authority; local business leaders, including the Molyvos Tourism Association and Association of Lesvos Entrepreneurs; faculty and students of University of the Aegean, Technical Chamber (Engineers) of Northern Aegean; and several international and national NGOs, including International Organization for Migration (IOM), International Rescue Committee (IRC), Red Cross and Iliaktida. 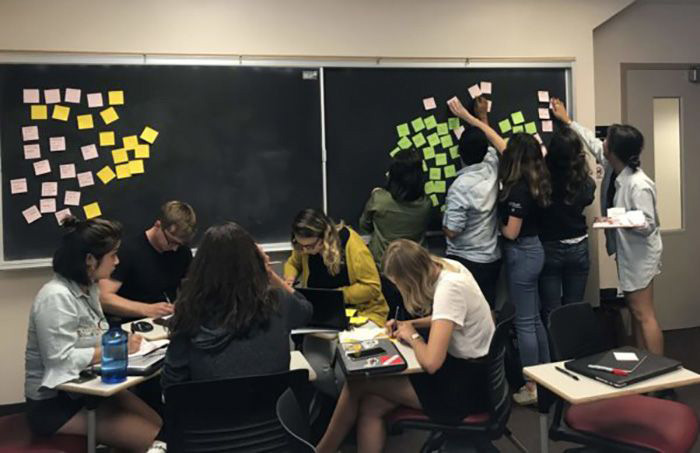 “The mission of USC in Lesvos had a variable we don’t often see in the past three years of the crisis, not only attention to the humanitarian aspect, which is important, but also the local community, the impact the whole situation had and still has on people living in Lesvos,” said Anastasios Perimenis, CEO of ETAL S.A., who has been leading development projects on the island and surrounding regions for nearly two decades.

The five teams are now gearing for a five-week sprint. They must first narrow down the problem areas they will focus on as well as design and build a prototype by the end of the first semester. The second semester is dedicated to refining, redesigning and implementing their solutions.

“The course is not only engaging in real world wicked problems, and as we have seen firsthand how challenging they truly are, but it is also equipping our students with critical skills, tools and methods to be even more impactful engineers, designers, and innovators,” said course instructor David Gerber.

“This exceptional faculty, student, and collaborative cohort is experiencing real world design and engineering in a cutting-edge fashion, one that we all hope will yield results both for our students and for our stakeholders.”

For the USC student participants, the opportunity to leverage engineering skills to help solve intractable problems is exhilarating.

“I’ve been working on a lot of theory-based ideas, but so far, none of my classes give me the opportunity to demonstrate what I’ve learned,” said Sofia Tavella, a junior majoring in mechanical engineering. “This class actually uses the skills we learn and puts them to the test.”

USC Students Go into Refugee Camps in Greece to Volunteer and Research Solutions to the Global Refugee Crisis was originally published on the University of Southern California website.