Texas A&M University’s Alamo cannon conservation project came to a historic conclusion Wednesday as the last of seven battle-used cannons were returned to the Alamo in a changing of the guard ceremony between living historians and members of the Texas A&M Corps of Cadets.

During the “Texas A&M and The Alamo Present: A Salute to Alamo Cannon Conservation” event at the Texas A&M System’s RELLIS Campus, Texas A&M System Chancellor John Sharp thanked Conservation Research Laboratory (CRL) Director Donny Hamilton and Research Associate Jim Jobling and the students who worked on the project for their year of conservation work. He also recognized members of the Corps of Cadets on who participated in the changing of the guard ceremony.

“I’m also proud to be part of a place that has the men and women in the Corps of Cadets, who have the same attitude that the people in the Alamo had, and that is life is not worth living without liberty,” Sharp said.

“What Texas A&M returns today to the people of Texas is a gift that truly will last for generations,” Bush said. “Texans and the 1.5 million visitors that come to the Alamo on an annual basis will get to see these artifacts up close and personal. When visitors are standing to that battleground listening to a living history interpreter, explaining the origins of the cannon, their imaginations can transport them back to one of the most pivotal moments in Texas history.”

Marcus Luttrell, Navy SEAL and subject of the book and film Lone Survivor, delivered remarks prior to the ceremony and underscored the importance of the Alamo and its artifacts to what it means to be a Texan.

“The Alamo is the House where our warrior spirit was born, and it’s a great example of what kind of people we are, how resilient we are, and how long we’re going to last,” Luttrell said. “The same iron that runs in that cannon runs in my veins.” 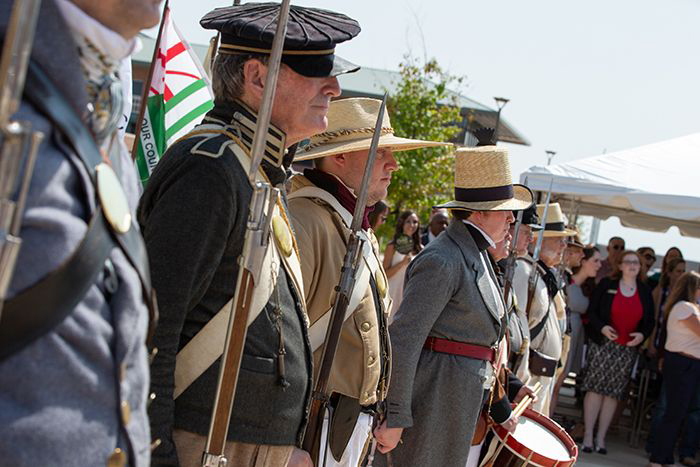 Alamo CEO Doug McDonald the cannons that had been conserved by CRL conservators had spent the last 50 years mounted on concrete pedestals on Alamo grounds, fully exposed to the elements and never fully conserved.

But the final cannon’s journey from the Alamo to the CRL and stretches back more than 200 years.

Alamo Curator Bruce Winders said that the cannon, a “16-pounder,” was brought to Texas by a New Yorker in 1817, but when the ship transporting it ran aground in Matagorda Bay along the Texas Gulf Coast, it had to be abandoned. The Spanish army found the ship and recovered its cargoes of weapons and ammunition, including the 16-pounder cannon, and transported the cargoes to San Antonio to be stored at the Alamo.

Following the Battle of the Alamo, Winders said the cannon was beyond repair and left behind by the Mexican army. The cannon was later recovered in 1908 on the Alamo compound.

Until the 16-pounder and other battle-used cannons were taken in by the Conservation Research Laboratory, none of the cannons had undergone any conservation other than routine painting.

“From this great conservation project, we have made so many great and exciting discoveries we didn’t know about these cannons,” Alamo Conservator Pam Rosser said.

Rosser said that among the discoveries was an unfired cannonball and the revelation the international origins of each cannons, including France, Wales and England.

During the conservation process, each cannon was rinsed in a series of boiling reverse osmosis water baths. After rinsing, three coats of tannic acid were applied to the surface of the iron cannon over a two-day period. This layer created a ferric tannate layer, which made the iron more corrosion resistant than before.

The canons were also coated with a matt polyurethane sealant which formed a water and oxygen resistant barrier.

Following the event, the cannon was transported back to the Alamo where it will be put on display.

Hamilton, who founded the CRL 40 years ago, spoke about the conservation process and said “it has been a privilege” to conserve the material history of Texas, the United States and countries around the world.

Texas A&M Returns Last Of Seven Conserved Cannons To The Alamo In Historic Fashion was originally published on the Texas A&M University website.