Researchers at the University of Washington have developed a cellphone app, called Second Chance, that uses sonar to monitor someone’s breathing rate and sense when an opioid overdose has occurred.

The app accurately detects overdose-related symptoms about 90 percent of the time and can track someone’s breathing from up to 3 feet away. The team published its results Jan. 9 in Science Translational Medicine.

“The idea is that people can use the app during opioid use so that if they overdose, the phone can potentially connect them to a friend or emergency services to provide naloxone,” said co-corresponding author Shyam Gollakota, an associate professor in the UW’s Paul G. Allen School of Computer Science & Engineering. “Here we show that we have created an algorithm for a smartphone that is capable of detecting overdoses by monitoring how someone’s breathing changes before and after opioid use.” 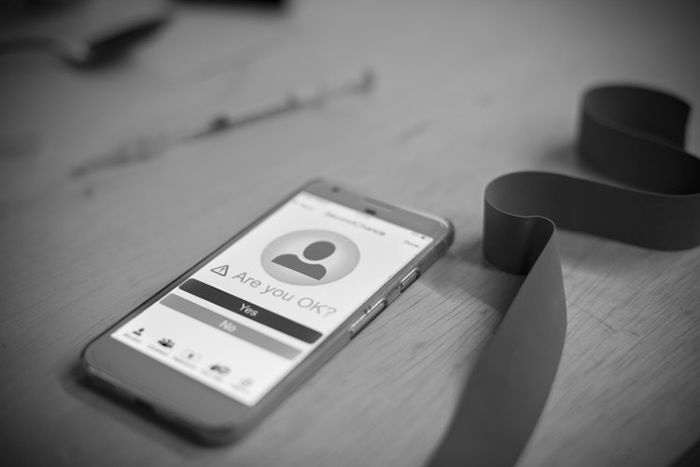 When the app detects decreased or absent breathing, it will send an alarm asking the person to interact with it before it contacts a trusted friend or emergency services. Mark Stone/University of Washington

At least 115 people die every day in the U.S. after overdosing on opioids, according to the National Institute on Drug Abuse.

And in 2016, illegal injectable opioids became the most common drug involved in overdose-related deaths. This spike has led to a national public health crisis and epidemic.

During an overdose, a person breathes slower or stops breathing altogether. These symptoms are reversible with the drug naloxone if caught in time.

But people who use opioids by themselves have no way of asking for help in the event of an overdose.

“We’re looking for two main precursors to opioid overdose: when a person stops breathing, or when a person’s breathing rate is seven breaths per minute or lower,” said co-corresponding author Dr. Jacob Sunshine, an assistant professor of anesthesiology and pain medicine at the UW School of Medicine. “Less than eight breaths per minute is a common cutoff point in a hospital that would trigger people to go to the bedside and make sure a patient is OK.”

“People aren’t always perfectly still while they’re injecting drugs, so we want to still be able to track their breathing as they’re moving around,” said lead author Rajalakshmi Nandakumar, a doctoral student in the Allen School. “We can also look for characteristic motions during opioid overdose, like if someone’s head slumps or nods off.”

To be able to use real-world data to design and test the algorithm behind the app, the researchers partnered with the Insite supervised injection facility in Vancouver, Canada. Insite is the first legal supervised consumption site in North America. As part of the study, participants at Insite wore monitors on their chests that also track breathing rates.

“We asked participants to prepare their drugs like they normally would, but then we monitored them for a minute pre-injection so the algorithm could get a baseline value for their breathing rate,” said Nandakumar. “After we got a baseline, we continued monitoring during the injection and then for five minutes afterward, because that’s the window when overdose symptoms occur.”

Of the 94 participants who tested the algorithm, 47 had a breathing rate of seven breaths per minute or slower, 49 stopped breathing for a significant period, and two people experienced an overdose event that required oxygen, ventilation and/or naloxone treatment. On average, the algorithm correctly identified breathing problems that foreshadow overdose 90 percent of the time.

The researchers also wanted to make sure the algorithm could detect actual overdose events, because these occur infrequently at Insite. The researchers worked with anesthesiology teams at UW Medical Center to “simulate” overdoses in an operating room, allowing the app to monitor people and detect when they stop breathing.

“When patients undergo anesthesia, they experience much of the same physiology that people experience when they’re having an overdose,” Sunshine said. “Nothing happens when people experience this event in the operating room because they’re receiving oxygen and they are under the care of an anesthesiology team. But this is a unique environment to capture difficult-to-reproduce data to help further refine the algorithms for what it looks like when someone has an acute overdose.”

For the simulation, the team recruited healthy participants undergoing previously scheduled elective surgeries. After providing informed consent, the patients then received standard anesthetic medications that led to 30 seconds of slower or absent breathing, and these events were captured by the device. The algorithm correctly predicted 19 out of the 20 simulated overdoses. For the one case it was wrong, the patient’s breathing rate was just above the algorithm’s threshold.

Right now, Second Chance is only monitoring the people who use it. The team would eventually like the app to interact with them.

The researchers are applying for FDA approval and have plans to commercialize this technology through a UW spinout called Sound Life Sciences, Inc. While this app could be used for all forms of opioid use, the team cautions that right now they have only tested it on illegal injectable opioid use because deaths from those overdoses are the most common.

“We’re experiencing an unprecedented epidemic of deaths from opioid use, and it’s unfortunate because these overdoses are completely reversible phenomena if they’re detected in time,” Sunshine said. “The goal of this project is to try to connect people who are often experiencing overdoses alone to known therapies that can save their lives. We hope that by keeping people safer, they can eventually access long-term treatment.”

This research was funded by the UW Alcohol and Drug Abuse Institute and the National Science Foundation.

First Smartphone App to Detect Opioid Overdose And Its Precursors was originally published on the University of Washington website.