For young adults facing poverty, the idea of earning a college degree can seem like a lofty – if not impossible – promise despite all of their hard work and academic talents.

But what if there were a way for college students facing adversity and socioeconomic challenges to not only graduate on time – but with little to no debt?

A program at Purdue University is doing exactly that for low-income Indiana students – and the numbers are speaking loudly.

Purdue Promise, a four-year program at Purdue offering additional financial assistance and one-on-one coaching for eligible Indiana’s 21st Century Scholars, has been paving the way for almost a decade for students facing socioeconomic challenges to receive an education. New data, based on the latest university census and preliminary data from the Division of Financial Aid, reveals that the program’s latest graduates now have a higher graduation rate than the rest of the student body at Purdue.

Teresa Lubbers, commissioner of the Indiana Commission for Higher Education, which oversees the state’s 21st Century Scholars program, says, “Purdue Promise is a highly effective, model program for 21st Century Scholars. It proves that the right combination of support services and financial aid can ensure that students complete their degrees in a timely and affordable way and move on to a rewarding career.”

Statewide, 21st Century Scholars who entered college in 2013 have a 42 percent on-time graduation rate. At Purdue, that rate is 56 percent.

Purdue Promise’s graduates are a testament to how the program has been successful over the years.

Keeley Stingel came to Purdue in 2009 with a 21st Century Scholars award to pay her tuition. At the time, the graduation rate of Purdue’s 21st Century Scholars was 10 to 11 percentage points behind the standard four-year graduation rate. While she met all of the academic requirements to get into Purdue as an undergraduate, she still doubted her ability to complete a degree at Purdue.

“Poverty was a jacket I could not take off,” Stingel says. “My dad was in and out of jail, and I’d never known a life where a woman, my mom, was not solely responsible for the well-being of the family. During my first year of Purdue, I met my oldest half-sister and saw her two times before she committed suicide. Then my brother moved out of my mom’s house, and my mom and two younger sisters became homeless while I was away at school.”

Purdue Promise was created the same year to provide additional support to 21st Century Scholars. Stingel says the program helped her earn a college degree that was her “ticket out of poverty.” Today, Stingel has a master’s degree and is the executive director for the Homeless Coalition of Southern Indiana. She also serves on the advisory board of 21st Century Scholars.

Purdue Promise students are more likely to be underrepresented minorities, females, former foster youth or from single-parent households compared with the rest of the student body at Purdue. The family income of 21st Century Scholars is 75 percent lower than the average student who applies for financial aid in Indiana. Again, all Purdue Promise students are 21st Century Scholars. 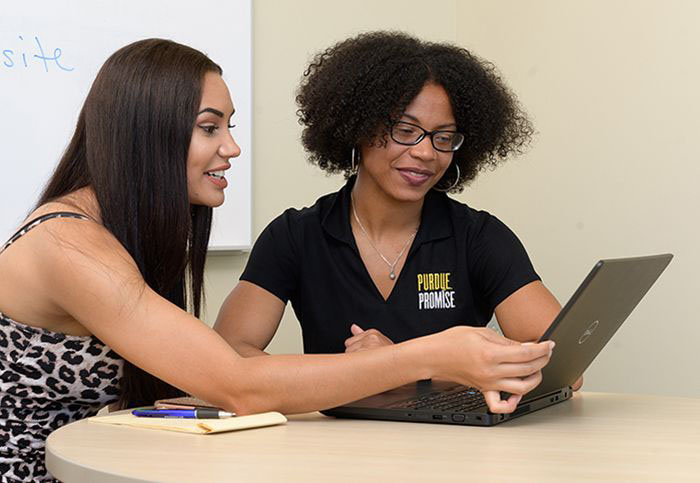 The program has more than 1,200 students, and each student works with a coach throughout their four years at Purdue. Coaches monitor the students’ progress, help them find resources, and address issues that may affect their success and financial aid eligibility.

Michelle Ashcraft, director of Purdue Promise, piloted the coaching model in 2013. Since then, Purdue Promise students’ four-year graduation rate has increased by more than 25 percentage points in comparison to Purdue’s overall increase of 13 percentage points. Ashcraft says the one-on-one coaching has been the most significant factor to the improved retention and graduation rates. Coaches receive 116 hours of training their first year and typically have degrees in higher education, student affairs, social work or counseling. Ashcraft says the diverse backgrounds of the coaches allow them to help students not only academically, but also with the range of issues that students might bring with them.

“What has been interesting is that these academic gains have allowed us to start changing the perspective and dialogue about low-income and first-generation students,” Ashcraft says. “In spite of whatever their pre-college circumstances may have been, their family backgrounds, their demographics, or any doubts that may be placed on them for who they were and where they came from, they continue to rise to high expectations Purdue sets for their education and to achieve significant goals and dreams.”

To be eligible for Purdue Promise, students must fit the following criteria:

AAU’s research universities are leading the effort to ensure that every qualified student has access to a world-class education regardless of their families’ finances. 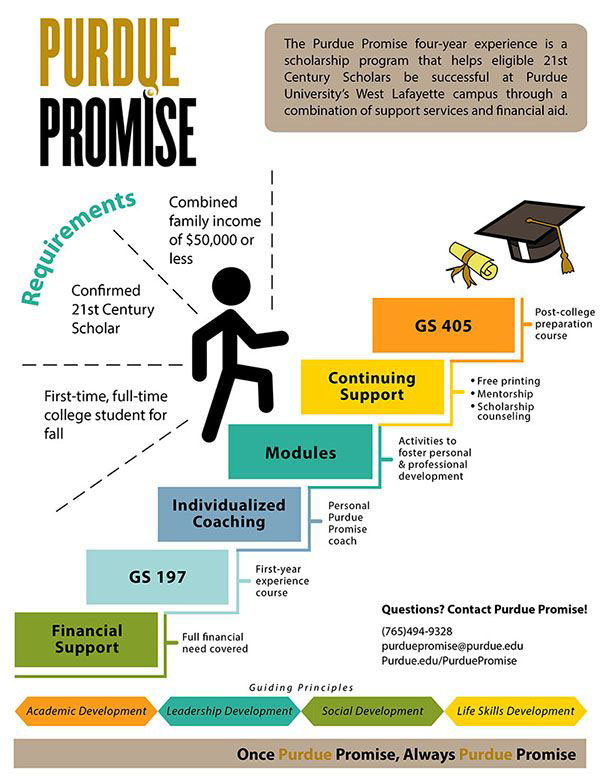