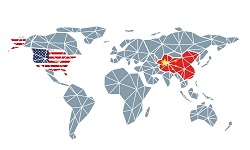 While the advancement of scientific research requires both open international collaboration and safeguarding proprietary information, America’s leading research universities are preparing for increased scrutiny from Congress and other bodies seeking to reduce undue influence from competitor nations like China. In one of its first actions earlier this month, the House voted 365-65 to form a new bipartisan committee focused on assessing the economic and competitive threats China poses to the United States. The committee will have the power to open investigations, hold public hearings, and make policy recommendations on U.S.-China matters. The panel’s formation signals Congress’s increased appetite for monitoring China’s influence on the nation’s scientific research and innovation enterprise.

Also last week, the National Academies of Sciences, Engineering, and Medicine (NASEM) Committee on Confucius Institutes at U.S. Institutions of Higher Education, chaired by Dartmouth College President Philip J. Hanlon, released a report proposing a set of criteria that the Department of Defense could use to develop a waiver process for institutions that maintain Confucius Institutes and apply for DoD research funding.

Many leaders in the scientific community are concerned that ever-more-stringent security measures to prevent the theft of scientific research by foreign entities are threatening scientific openness and international collaboration among researchers. At a NASEM workshop held last November, AAU Senior Vice President for Science Policy and Global Affairs Toby Smith cautioned against going too far when it comes to research security. “Our very job at universities is to disseminate knowledge,” he said.

America’s leading research universities are committed to working with governments, research funding agencies, and others to mitigate threats from foreign entities while ensuring that those efforts do not undermine the spirit of collaboration and openness that drive scientific innovation and progress. 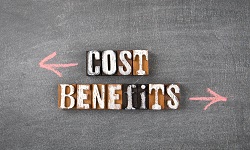 Earlier this month, the Department of Education issued a request for information on how best to identify “low-financial-value” postsecondary programs that cost a lot but do not provide adequate financial returns for students or prepare them sufficiently for the workforce.

According to the agency, students who borrow loans to enroll in “low-financial-value” programs often struggle to repay their debts. It hopes that publishing an annual list of such programs would improve awareness and shield students from the negative consequences of borrowing loans to enroll in them. Right now, the agency is seeking input on what “measures and metrics” it can use to determine which programs would meet the “low-financial-value” definition. The public can comment on this request until February 10. AAU is currently discussing joining other higher education organizations to submit potential comments on this request.

Four of the eight new appointees are affiliated with AAU member institutions:

White House Office of Science and Technology Policy Director Arati Prabhakar and NSF Director Sethuraman Panchanathan released statements applauding the announcement. “I am delighted that President Biden has appointed these world-class scientific and engineering leaders to the National Science Board,” said Prabhakar. “I am especially proud that the president’s appointments will make this the most diverse National Science Board in history, working to deliver results for every American,” she added.

The Texas Tribune: Texas Universities Block Access to TikTok on Campus Wi-Fi Networks – Texas public universities, including the University of Texas at Austin and Texas A&M University, have blocked access to TikTok on their campus Wi-Fi and wired networks in response to a directive from Texas Governor Greg Abbott. The directive cites TikTok’s collection of user data and connection to the Chinese government as reasons for restricting access to the app.

The New York Times: Alarmed by A.I. Chatbots, Universities Start Revamping How They Teach – ChatGPT uses an advanced form of artificial intelligence to generate text in response to user prompts. Teachers, concerned with how students might be misusing the chatbot to write essays and complete assignments, are changing how they teach and the nature of the work they assign to students. Universities are also taking steps to educate students about academic integrity and to implement the use of programs that can easily identify AI-generated text.

CNN: Federal Student Loan Office Has Lots to Do but No New Money to Do It – The Federal Student Aid Office did not receive any funding increases in the FY23 spending bill. Now, with a flat budget, the office is preparing for potential student loan forgiveness; the end of the pause on student loan repayments; a rehaul of many student loan repayment plans, including the public service loan forgiveness program and the income-driven repayment program; and updates to the federal student aid application form known as FAFSA. 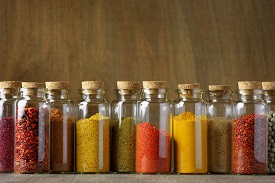 A new study by researchers at Rutgers University and North Carolina State University finds that, during food preparation, spice containers can become easily cross-contaminated with microorganisms from raw meat or poultry products that are capable of causing foodborne illnesses. The researchers found that the most frequently contaminated objects in the kitchen are spice containers, followed by cutting boards and trash can lids. 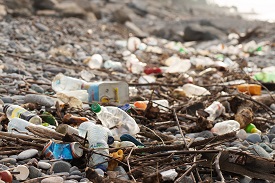 Duke University researchers examined corporate pledges to reduce plastic pollution and found that only a few corporations have prioritized “reducing their use of virgin plastic” or reducing their net plastic usage. The researchers also found that most commitments included “no timelines, no deadlines, [and] no quantifiable ways of assessing if progress was being made.” According to the researchers, global plastics production is expected to double by 2040. 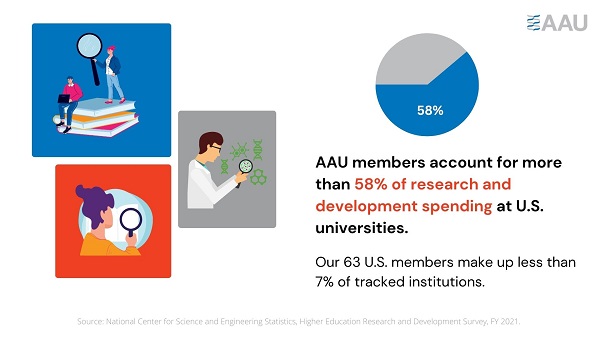 AAU Members Responsible for More than Half of R&D Spending at U.S. Universities

AAU’s 63 members in the United States account for more than 58% of all research and development spending at U.S. universities, according to the FY21 Higher Education Research and Development survey conducted by the National Science Foundation. AAU members composed only 7% of the 910 U.S. institutions the NSF tracked for this survey, which included institutions that award bachelor’s degrees and spent at least $150,000 on R&D. The survey underscores the outsized role America’s leading research universities play in innovating for the future and in improving the health and well-being of all Americans.